Study finds that most people suck at Rock, Paper, Scissors 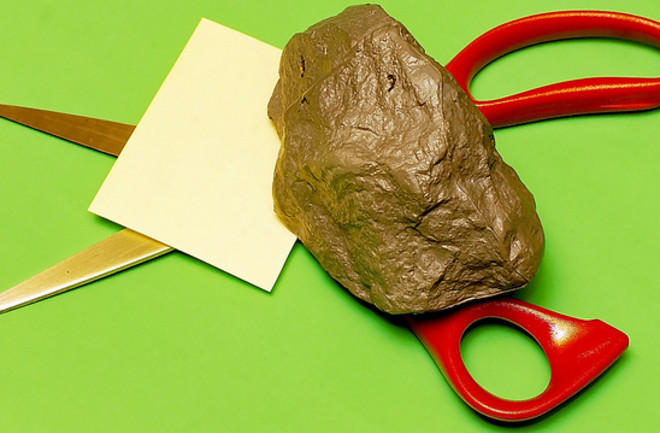 Photo: flickr/Mark TurnauckasThe game of Rock, Paper, Scissors (RPS) seems pretty straightforward, right? Well, according to this study, a host of psychological effects come into play in this seemingly simple game. Here, the researchers pitted humans against computerized opponents to determine the types of strategies people used in different scenarios. They found that, although the optimal strategy is to pick rock, paper, or scissors equally often (and randomly), people tended to slightly over-select rock, perhaps because of its air of invulnerability. Not only that, but people tended to fall into patterns where they stick with the same item if they win, but switch if there's a loss or draw -- a non-random approach that makes them easier to beat. The authors point out that although playing randomly is theoretically the best RPS strategy (and children tend to be quite good at this), the results of the study "could be used by the most savvy RPS player in the development of suitable counter-strategies." If that's you, you're welcome!Negative outcomes evoke cyclic irrational decisions in Rock, Paper, Scissors "Rock, Paper, Scissors (RPS) represents a unique gaming space in which the predictions of human rational decision-making can be compared with actual performance. Playing a computerized opponent adopting a mixed-strategy equilibrium, participants revealed a non-significant tendency to over-select Rock. Further violations of rational decision-making were observed using an inter-trial analysis where participants were more likely to switch their item selection at trial n + 1 following a loss or draw at trial n, revealing the strategic vulnerability of individuals following the experience of negative rather than positive outcome. Unique switch strategies related to each of these trial n outcomes were also identified: after losing participants were more likely to ‘downgrade’ their item (e.g., Rock followed by Scissors) but after drawing participants were more likely to ‘upgrade’ their item (e.g., Rock followed by Paper). Further repetition analysis revealed that participants were more likely to continue their specific cyclic item change strategy into trial n + 2. The data reveal the strategic vulnerability of individuals following the experience of negative rather than positive outcome, the tensions between behavioural and cognitive influences on decision making, and underline the dangers of increased behavioural predictability in other recursive, non-cooperative environments such as economics and politics." Related content: Is poker a game of skill or chance?Cheaters may not win, but winners tend to cheat.Why do people get superstitious in some situations but not others?