When did human ancestors come down from the branches? A look inside a fossilized hip joint shows how bones adapted for crouching and walking on all fours. 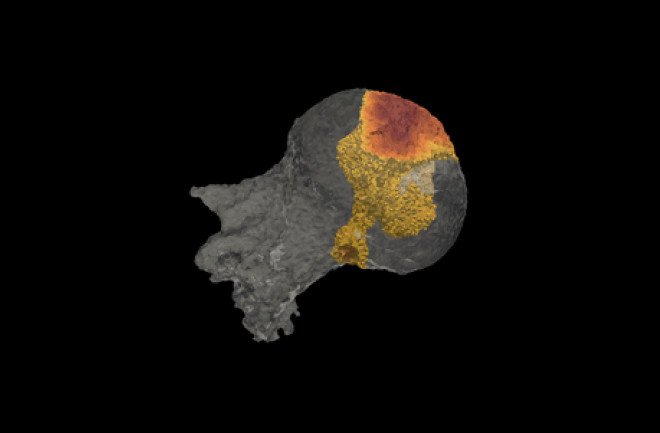 A hip joint from an ancient human ancestor could give researchers clues as to when our species stopped climbing trees. (Credit: Christopher Dunmore)

A chimp would smoke you in a tree-climbing contest. It’s not your fault — their bodies are built for it, with longer arms that move them through branches efficiently.

Though a human body looks different than a chimp’s, the line between the two species blurs in the archaeological record. Fossilized bones have inspired scientific debate over when our human ancestors gave up climbing trees for good. But a recent peek inside a fossilized hip joint suggests our ancient relatives were scampering up trees more recently than previously thought.

The hip joint, from a human ancestor dating back between about 1 million to 2 million years ago, seems to have a bone structure indicating a lot of time spent with their knees close to their chest. This balled-up position could be interpreted as the kind of crouch needed to climb trees, researchers explain in a new Proceedings of the National Academy of Sciences report. If that’s the case, this relative was reaching for branches at a time when researchers thought humans had transitioned almost entirely to two-footed, upright walking.

“There has been some speculation that these species might have practiced periodic bouts of climbing, but the evidence has been sparse, controversial and not widely accepted,” authors from Europe and South Africa shared in a joint statement. But with this closer look at the hip joint, “climbing was still an important part of these species’ adaptive repertoire,” they report.

Hidden in the Bones

Most of what we know about our human ancestors comes from looking at their bones. For example, rough patches can indicate where muscles attached, or the position of a knee joint can suggest a leg’s range of motion. But this kind of exterior examination alone doesn’t determine which ancestors walked on two feet, which ones spent their time in trees, and which could do both.

Instead, the tissue preserved inside bones helps complete the story. The spongy matter, which might look soft and weak, actually helps researchers understand how strong our ancestors were. Tissue density changes depending on what kind of activity they did often — the “ball” in the “ball and socket” of the hip joint is particularly susceptible to these changes.

So Leoni Georgiou, an anthropologist at the University of Kent, and her colleagues decided to see if the bone density in the ball and socket joints of early humans could settle the climbing vs. walking debate. They took micro-CT scans, or X-rays that compile a series of still images into a 3D rendering, to see the bone density inside two hip joints. Both came from the same set of caves in South Africa; one fossil dated back to between 2.2 million and 2.8 million years ago, while the other was of a different, more closely related human ancestor species dating back to between 1.1 million and 2.18 million years ago.

The inside of the “ball” in the older fossil joint seemed to show a density pattern somewhat similar to that of modern-day humans. This Australopithecus afarensis, a species with a small body and big brain, seemed to walk upright. The “ball” of the younger specimen, however, revealed dense streaks in two places. One matched up with walking-related development. The other dense stretch aligned with where our arboreal relatives, like chimps and gorillas, develop bone density in their hips.

The younger, potentially tree-climbing relative might belong to the same branch of the evolutionary tree as us and other Homo species, but researchers aren’t sure. It’s also possible their hips developed knees-to-chest-like density patterns because the individual was squatting a lot, something that would have to be ruled out with future research.

This finding might make tree-climbing a more recent part of human history, but it can’t weigh in on how much time early humans spent among the canopies 2 million years ago.

“Unfortunately, it is not yet fully understood how ‘regularly’ they would have to have done this activity to trigger bone remodeling,” Georgiou said via email. “We understand that it would have to be a significant part of their locomotion to result in this pattern.”