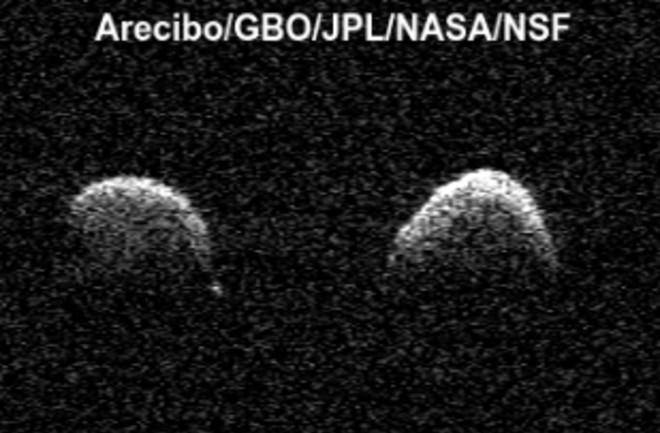 Researchers discovered a near-Earth object in December 2017 that would soon make its closest approach to Earth for the next 170 years. Observations during its flyby revealed it to be something more extraordinary than expected — a pair of equal-mass objects. (Credit: Arecibo/GBO/NSF/NASA/JPL-Caltech)

More than 18,000 near-Earth asteroids have been identified, and all of them are thought to be remnants of our solar system’s formation. They each have their own unique structure and properties. But despite their distinct variations, we still come across an oddball every once in awhile. On June 26, two separate teams of scientists confirmed an unusual “equal mass” binary asteroid cruising past Earth — one of only four ever discovered.

Asteroid 2017 YE5 consists of two equal-size objects, each stretching roughly 3,000 feet (900 meters) in diameter, orbiting each other once every 20 to 24 hours. It’s pretty common for large asteroids to link up with smaller ones, with about 15 percent of near-Earth asteroids over 650 feet (200 meters) being binary pairs. But coming across a binary consisting of two similar-sized objects is much more rare. The asteroid’s uncommon nature was hidden from researchers until very recently, though. It was first discovered in December 2017 by the Morocco Oukaimeden Sky Survey and, at the time, was believed to be a single near-Earth object. To investigate, researchers scheduled follow-up studies for June 21 when the asteroid was just 3.7 million miles (6 million kilometers) from Earth, the closest it would be for the next 170 years.

During its fly-by, NASA’s Goldstone Solar System Radar (GSSR) in California detected something unexpected — two distinct mounds jutting out of its body. Because of its orientation in the sky, though, it was unclear if the asteroid was one abnormally shaped mass or two separate entities. But with some time, the researchers were able to witness an orbital rotation that revealed a clear void between the objects.

They shared their discovery with colleagues at Puerto Rico’s Arecibo Observatory, who were already planning on observing the asteroid. To get a more comprehensive view of the potential duo, the Arecibo team collaborated with scientists at West Virginia’s Green Bank Observatory (GBO). Together, they would study the asteroid using a bi-static radar configuration, in which radar signals are bounced off the asteroid by Arecibo and received by GBO. The technique enabled the observatories to view different areas of the asteroid simultaneously, leading each team to confirm that 2017 YE5 is, in fact, an equal mass binary asteroid.

Its dual nature wasn’t the only strange attribute to come to light, either. During optical observations, researchers were able to estimate the asteroid’s size based on the amount of visible light it emitted. However, radar imaging showed that the duo is darker in color and reflects less sunlight than typical asteroids, making it larger than its optical brightness lets on. The research also revealed distinct differences in the objects’ radar reflectivity, which hasn’t been observed in previously studied binary asteroids. These variations suggest that the masses likely have different surface compositions, textures, or densities.

We won’t be able to observe 2017 YE5 at such close range for over a century, but we won’t be sitting around idly, waiting for its arrival. The researchers plan to dig into the asteroid’s radar and optical data to predict the densities of each component, which could give insight into their formations, structures, and compositions. And who knows. With the rapid expansion of space technology lately, we might be able to dissect its peculiar characteristics from afar, rather than waiting around for 170 years.