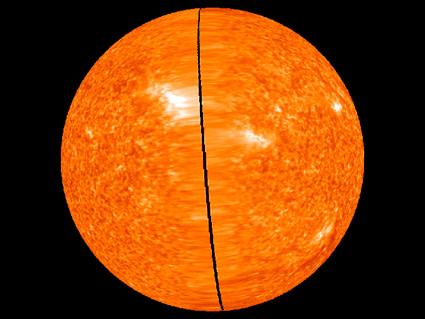 The twin satellites have taken their positions, and now we get to see something we've never seen before: the whole sun, all at once. The pair of observers that make up NASA's Solar Terrestrial Relations Observatory (STEREO) have been traveling since 2006 to reach opposite sides of our star, and they just beamed back the first 360-degree solar images.

The satellites are in the same orbital path as Earth, more or less, and have just taken up their final positions — one is where we'll be in three months, and the other where we were three months ago. (The first has NASA's least imaginative name to date: STEREO A, for "ahead." The second is called STEREO B, for...you can probably guess.) [TIME]

Seeing the far side of the sun

isn't just a scientific curiosity. It could also helps researchers figure out the sun's violent outbursts, like the coronal mass ejections

that could endanger astronauts and foul up satellites if one headed for Earth.

“Nothing can hide from us anymore,” says Joseph Gurman, an engineer at NASA’s Goddard Spaceflight Center in Greenbelt, Maryland and project scientist on the STEREO mission. The wraparound coverage allows researchers to see violent eruptions emanating from the Sun’s surface that they might otherwise miss, he adds. [Nature]

And, says project scientist Richard Harrison, sometimes the best way to see what's headed right at you is to have eyes on the side.

"By being away from the Sun-Earth line, you can look back at the space between the Sun and the Earth and see any of these clouds, these coronal mass ejections that are thrown out of the Sun and are coming our way - you can even see these things passing over the Earth. Those are the key to what Stereo's all about." [BBC News]

For plenty more about this catalog of the entire sun, check out the post by DISCOVER blogger Phil Plait

and the havoc it can cause DISCOVER: Seeing Sun Storms in Stereo