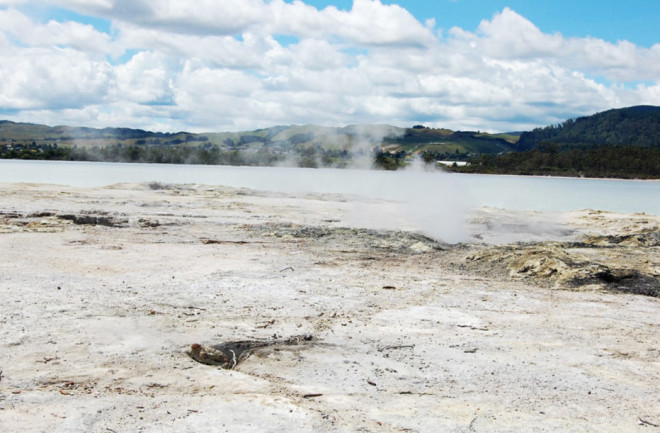 Steaming volcanic gas vents on the shores of Lake Rotorua near the city of the same name in New Zealand. Taken in 2009.Erik Klemetti The North Island of New Zealand is chock full of volcanoes---and big volcanoes at that. No less than four major calderas sit in the Taupo Volcanic Zone (TVZ) that stretches from White Island in the north to Ruapehu in the south. One of the most violent volcanic eruptions in human history took place in ~186 AD from Lake Taupo. That rhyolitic (high silica) eruption produced an ash plume that may have towered 50 kilometers (164,000 feet!) over the caldera, what we call an "ultraplinian" eruption (and anything that is "ultra" has to be big). More recently, Tarawera in the Okataina caldera erupted in 1886 in one of the most explosive basaltic (low silica) eruptions on record that had ash plume that reached 10 kilometers (~32,000 feet) and buried a number of towns along with blasting a new valley out of the landscape. The North Island is definitely a place where volcanic unrest is taken seriously. So, the somewhat surprising steam explosions that took place this week at Lake Rotorua have caught a lot of people's attention. On November 28, a large steam explosion occurred near Ohinemutu near the shores. Then, on December 30, the caldera had a second, smaller explosion. The first explosion sent water and volcanic gases 25-30 meters (80-100 feet) up in a geyser-like blast. The event was brief and over by morning, so very few people actually saw the explosion happen. This was the first hydrothermal explosion at Rotorua in 15 years and came as a surprise to GNS Science, the volcano monitoring agency of New Zealand. People near the explosion reported hearing low, rumbling noises prior to the blast, which likely were caused by the movement of hot water and steam subsurface. The second explosion came on Wednesday (November 30) and this one was caught on video. In that event, you can see the lake surface begin to churn with heavy steam and dark material (likely sediment from the lake bottom). This blast looks much smaller, with water and debris only reaching a few meters (10 feet) over the lake surface. Hydrothermal explosions like these are common in calderas. However, the trigger of these explosions is unclear. GNS Science has suggested that they could be related to the recent spate of earthquakes New Zealand has experienced since the M7.8 on November 13. This could make sense: Hydrothermal systems under volcanoes have been known to readjust after earthquakes due to movement on the faults that riddle the ground beneath the TVZ. Brad Scott from GNS Science suggested that the second blast might have also been related to recent weather, and that it's likely linked to what triggered the initial blast. However, Scott has said that these new steam explosions do not suggest that the Rotorua caldera is heading towards any sort of volcanic activity; GNS Science has not raised the alert status for the volcanic system either. Steam explosions are driven by building up of steam in the subsurface hydrothermal system until the cap of rock above can't hold the pressure---like popping a champagne cork. These steam explosions, although relatively infrequent at Rotorua, do happen and no eruption has occurred near the lake in 25,000 years. Even the explosions that occurred during the 1980s-2001 were likely helped along by drilling during attempts to exploit the hydrothermal system at Rotorua. Anyone who has been to Rotorua can attest to its volcanic nature (see above). There are geysers and mudpots on one side of town, including the impressive Pohutu geyser, buildings have been closed due to volcanic gases seeping into their basements, and many sewer grates steam from the gases and heat of the magma deep below the street. It is actually a remarkable location, as if you built a small city directly on top of the hydrothermal areas of Yellowstone Caldera in Wyoming. Although steam explosions like these two might seem dramatic, they are not signs of impending destruction at Rotorua, but rather just continuing evidence of the volcanic nature of the North Island of New Zealand.