Spectroscopy reveals there's more to art than what meets the eye. 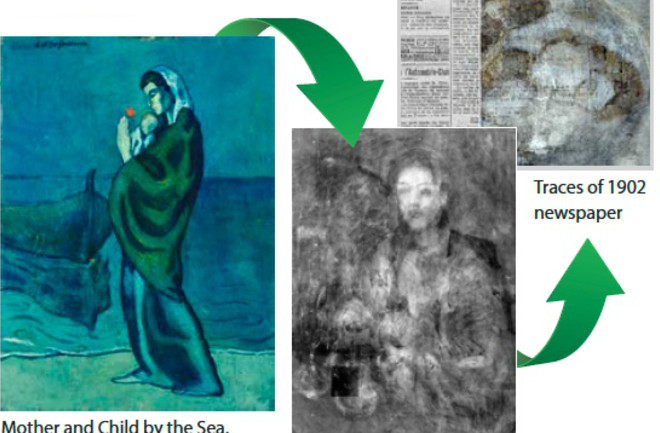 In some cases, researchers hoping to discover something new must borrow technology from a seemingly unrelated field. John Delaney, a physicist working at the National Gallery of Art in Washington, D.C., knows this as well as anyone. Working with other physicists, as well as chemists and conservators, the senior imaging scientist has been using spectroscopy to probe famous artwork.

This new kind of research is non-destructive, so it conserves existing paintings and sculptures for future generations while revealing secrets about their provenance. Some of the insights he gained into the works of Pablo Picasso this year illustrate the kind of art finds we can expect in the future.

Mother and Child by the Sea

In April, Delaney studied Mother and Child by the Sea, Picasso’s 1902 painting. Near-infrared imaging revealed the unmistakable shapes of letters in newsprint lurking behind the paint, originating from a 1902 issue of Le Journal. It confirmed the date of the painting and suggests Picasso covered a canvas he’d previously painted on with newspaper before starting a new painting.

Researchers collaborating with Delaney on La Miséreuse accroupie (The Crouching Beggar) revealed that, in another case of recycling, the Spanish artist painted over an existing canvas, this one containing another painter’s work. The scientists could see both the previous painting and how Picasso incorporated it into his work.

The same team also used X-rays to analyze 39 sculptures from the Picasso Museum, in Paris, identifying the mix of metals within and even tracking them to particular foundries.