How Paleontologists Are Finding Fossils in Surprising Places

Fossils from unexpected places, and new ways to study them, are changing how we see the deep past. 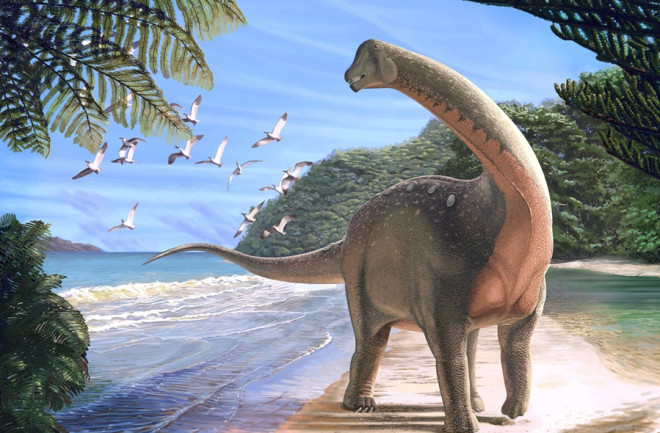 About 75 million years ago, the Dakhla Oasis in Egypt’s Western Desert was a world of lush vegetation and coastlines where the titanosaur Mansourasaurus, described this year, roamed. Andrew Mcafee/Carnegie Museum of Natural Histo

About 75 million years ago, the Dakhla Oasis in Egypt’s Western Desert was a world of lush vegetation and coastlines where the titanosaur Mansourasaurus, described this year, roamed.Andrew Mcafee/Carnegie Museum of Natural History

When Mansourasaurus was formally described in January in Nature Ecology & Evolution, it represented more than just a cool new fossil. The animal, which lived about 75 million years ago in what’s now Egypt’s Dakhla Oasis, belongs to the titanosaurs, the most evolved of the giant, long-necked, whip-tailed, plant-eating dinosaurs. At about 30 feet long, Mansourasaurus isn’t the largest titanosaur, but it is the most complete of any dinosaur specimen from that period in Africa. It also has some surprising anatomical traits that link it to unexpected relatives thousands of miles away. A team of young trailblazers made the find, changing how the field is perceived in their conservative country.

Discover asked Hesham Sallam, lead author and founder and director of the Mansoura University Vertebrate Paleontology (MUVP) program, to explain why Mansourasaurus is bridging the paleontology world in more ways than one.

Q: What makes Mansourasaurus, named for your university, significant for our understanding of dinosaur distribution and diversity? A: Its sister group comes from Europe. We thought Africa was really totally isolated [during this time], but having European dinosaurs related to it says there was a land bridge that allowed dinosaurs to migrate back and forth, between Europe and Africa. It’s the first land animal to suggest this.

Q: You’ve called Mansourasaurus “a new chapter in Egyptian vertebrate paleontology.” Why? A: Nobody knows anything about dinosaurs in Egypt. But for Mansourasaurus, all the media came to cover it. People didn’t know what Egypt had in terms of its paleontological heritage. It’s a big deal in our country. To have a paleontological conversation in Egypt is a new thing.

Q: MUVP is also a new thing for Egypt: the first vertebrate paleontology program of its kind not just in the country, but the region. You’ve noted that before MUVP, there really weren’t any resources in Arabic for interested students in the Middle East and North Africa. How did it get started? A: I started the program in my mind in 2008 while eating lunch at Stony Brook University. I finished my Ph.D. in 2010 and came back to Egypt, starting the new lab with just one table — there was nothing in Egypt in terms of equipment. All of my luggage when I returned home was full of equipment for the lab. I would share in class that I had a dream to build an Egyptian paleontology program. Two girls knocked on my office door and said, “We need to talk. We’d like to share that dream with you.” In my mind, this was not going to work. Paleontologists go out in the field, they have to camp, but these girls had never been outside their homes. But I said OK, and they proved me wrong. Now they both have their master’s degrees and are working on their Ph.D.s.

Q: In addition to dinosaurs, MUVP has been active in finding and publishing on a range of animals, from primates to fish. What’s your team working on now? A: Every month we go somewhere in Egypt. Last month we went to the Spinosaurus site [where German paleontologist Ernst Stromer in 1912 found the largest predatory dinosaur known]. What we found are really bizarre animals that even I can’t explain. We know there were five dinosaurs found there before, and this isn’t one of them. That means we have something new, which is very exciting.