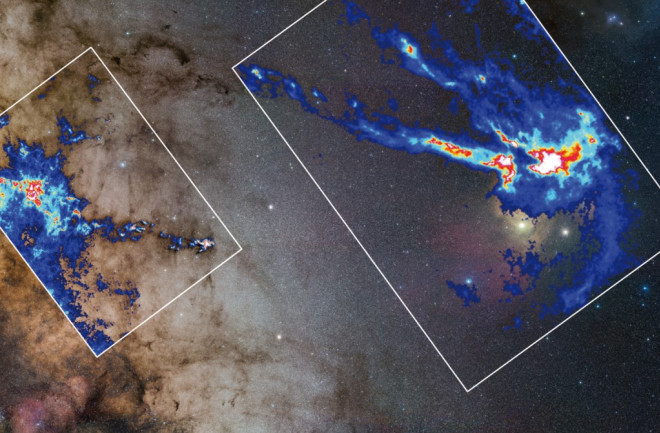 The Pipe Nebula (left) and the Rho Ophiuchi cloud (right) in the Milky Way. Each inset map shows how much the light of background stars is dimmed as it passes through the cloud in question. Credit: Background: ESO/S. Guisard // Column-density maps: J. Kainulainen, MPIA Understanding stars is fundamental to the science of astronomy: the “astro” in “astronomy” means star, after all. And courtesy of a new study researchers have a better understanding of how these things form — providing insights not just into the stars themselves, but also into galactic and planetary evolution.

A Star Is Born

Astronomers weren’t totally in the dark about star formation. They knew that stars form within giant clouds of molecular gas (mostly hydrogen) and dust. When an area within the cloud becomes too full of molecules, it undergoes gravitational collapse — the area attracts more stuff, which makes it denser and more massive, which attracts yet more stuff — until enough stuff is there to ignite nuclear fusion, the process that fuels a star. The problem was figuring out how to know when an area is “too full” of molecules. What’s the "critical density" at which gas clouds turn into stars? Astronomers had long been trying to figure this out, and have devised many models of star formation. The only problem was, it’s pretty hard to measure how dense a gas cloud is to begin with.

Now astronomers have shown that they can determine a gas cloud’s density by analyzing how it distorts the light from distant stars “behind” it. The more a star dims, the more gas it’s traveling through, and therefore the denser the cloud is at that point. Armed with a way of calculating a cloud’s density, the team carried out direct observations of 16 nearby star-forming gas clouds (within about 850 light-years of Earth) to determine a value for the critical density necessary to set off a new star: around 5,000 hydrogen molecules per cubic centimeter. That's a lot lower than the theories had predicted (a whole order of magnitude lower, in some cases), which is surprising. It's unclear yet why the guesses were so far off. The findings appeared in this week’s Science. Now that astronomers have this technique at their disposal, they’ll be better able to test and refine their theories on star formation. That could mean a solution to one of the greatest challenges of astrophysics: being able to look at a gas cloud and predict how many stars will come out of it, and what kind of stars they’ll be. This gives researchers great predictive power in figuring out how galaxies (including our own) will behave in the future. It's also a boon to researchers who study planet formation, since star birth is the first step in the process of creating a solar system.