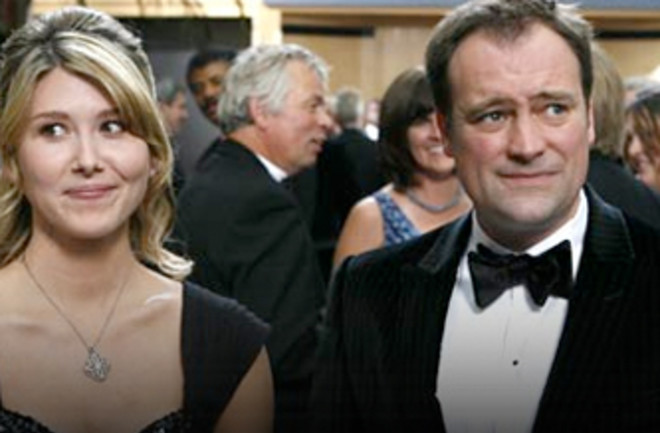 Friday night's episode of Stargate Atlantis featured the show's resident genius physicist, Rodney McKay, making a visit to an elaborate scientific presentation conducted by an old rival. Because McKay is, well, McKay, he thinks this is the ideal setting for a first date with Atlantis's doctor Jennifer Keller (Firefly fans will recognize Jewel Staite in the role). McKay runs into a whole bunch of frenemies at the presentation, including hilarious cameos by the American Museum of Natural History's Neil de Grasse Tyson (who has been name checked before on Atlantis) and Bill "The Science Guy" Nye. Things take a turn for the worse when McKay's rival (played by Kids in the Hall alum Dave Foley) demonstrates his latest invention, a machine intended to solve global warming by sucking heat through a transdimensional bridge to another universe. Of course, Things Go Wrong, and the entire facility and everyone in it is threatened with death by freezing. But hey, we've got a room full of top scientists! They'll put their heads together and figure it out, right? Ha ha ha! No -- the room instantly dissolves into a squabbling babble, with each scientist convinced that their approach is the best. And indeed in real life, although all professional disciplines are invariably competitive and have their fair share of forceful personalities, physics appears to be something of a magnet for large egos. Of course, there are many normal personalities in physics, but not for nothing did Ann Finkbeiner's excellent history of the Jasons (an elite group of scientists that advise the government) have a working title of "The Arrogance of Physicists." Nor did Robert Oppenheimer, the man who led the Manhattan Project, succeed in building the atom bomb because he was a brilliant scientist (although he was); it's well documented that he succeeded because of his unique ability to get many of the biggest names in science all pulling together. The question is, which came first, the science or ego? That is, does physics naturally appeal to a certain personality type or does pursuing physics promote and develop certain traits? In any case, many times in fiction, scientists (of whatever discipline) are portrayed as somewhat otherworldly, sometimes even saintly, figures, nobly pursuing knowledge and untainted by pettiness. But scientists are human beings too. In showing a group of status-conscious individuals capable of taking great offense at the smallest slight, albeit in an exaggerated manner (dismissive putdowns during audience Q&A is more likely than outright shouting) Atlantis get points for its scientific realism.