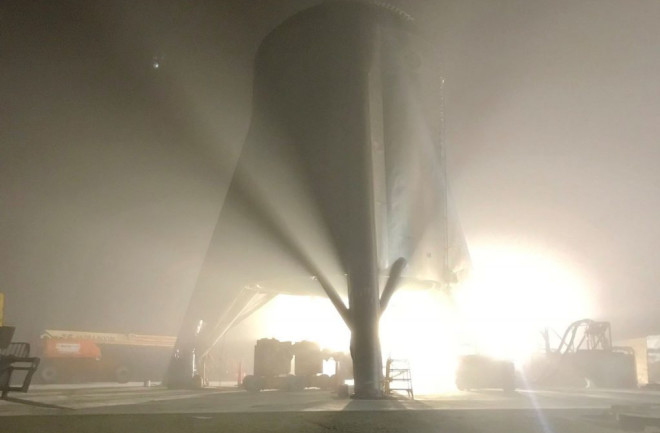 On Tuesday, SpaceX ran its second test of Starhopper, the prototype for their enormous future passenger spacecraft. The static fire test was meant to measure the Raptor engines that power the craft. But at the end of the five second test, Starhopper was instead surrounded by an enormous fireball, as shown in a video from the rural Texas test site gathered by Everyday Astronaut.

Elon Musk and SpaceX have yet to comment about what happened during the test. However, people viewing the test site on Wednesday reported that Starhopper still seems to be physically intact after the fire. The extent of damage, if any, remains to be seen.

Starhopper is a prototype for the SpaceX’s next generation of spacecraft. That next-gen craft, called Starship, aims to carry up to 100 passengers on trips to low-Earth orbit, the moon and even Mars.

On July 12, Musk tweeted that Starhopper could see its first untethered test as early as July 16, the 50th anniversary of the launch of Apollo 11. That test was ultimately pushed in favor of Tuesday’s static test.

SpaceX’s Crew Dragon spacecraft, built to carry NASA astronauts to the International Space Station, exploded during a test earlier this year. The company recently released a report on what caused that failure.