SpaceX's Crew Dragon Successfully Docked with the ISS, Will Return to Earth Friday 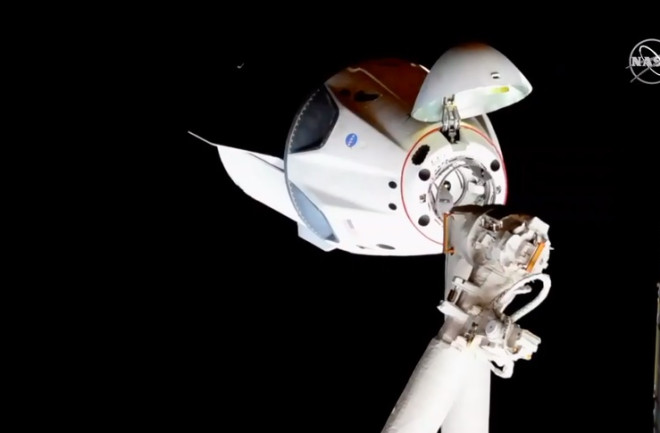 Previously, the Dragon cargo capsule has merely flown close before being grabbed by a robotic arm under the control of ISS crewmembers. This was SpaceX’s first attempt at docking using their own guidance and propulsion systems. Even last week, two days before launch, Russia still had safety concerns with the docking procedure, deputy ISS program manager Joel Montalbano said in a pre-launch briefing last week. SpaceX uses a different guidance system than past craft that docked directly with ISS. Russia is a stakeholder in the station itself, and also has a cosmonaut onboard. However, NASA, SpaceX, and Roscosmos were able to come to an agreement that satisfied all parties before the launch, and precautions were discussed to move crew to the Soyuz capsule should anything look amiss. SpaceX tested their systems even as they prepared to dock, moving in close and then backing up again to prove their reliability. The docking itself went without issue, and ISS crewmembers have since entered Dragon to begin transferring cargo. [embed]https://twitter.com/i/status/1102159821669875712[/embed] NASA hopes to certify SpaceX to fly crewed missions to ISS before the end of the year. That certification relies on the current so-called Demo-1 mission continuing to succeed, as well as SpaceX’s Demo-2 flight scheduled for July. That second trip will have NASA astronauts on board. Boeing has similar uncrewed and crewed test flights planned for April and August, respectively, for their own certification tests. Dragon will remain attached to ISS for five days. On March 8 it will separate again and splash down in the Atlantic Ocean. This will be an important test of crew Dragon’s re-entry and parachute systems, which are different from its cargo runs. NASA will be livestreaming both events. The coverage for the undocking will begin at 2 a.m. EST, followed by a break and further coverage starting at 7:30am EST for Dragon’s return and landing.