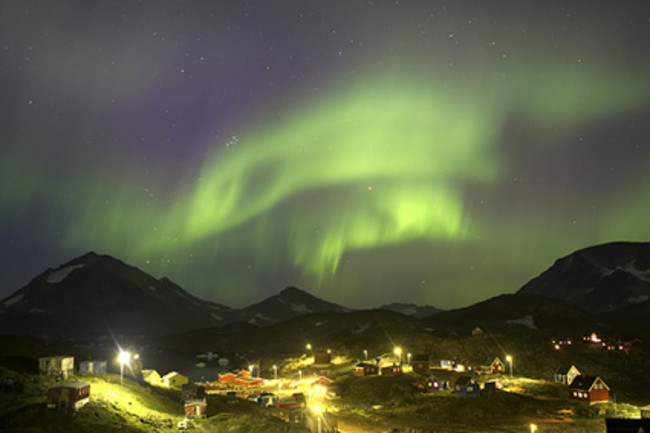 Thanks to a quintet of satellites and a backup posse of ground-based telescopes, researchers have gotten their best look ever at how auroras--also known as the southern and northern lights--begin to form in space. The dazzling light displays are provoked by "space tornadoes," researchers say.

Whirling at more than a million miles per hour, these invisible, funnel-shaped solar windstorms carry electrical currents of more than a hundred thousand amps—roughly ten times that of an average lightning strike—scientists announced.... And they're huge: up to 44,000 miles (70,000 kilometers) long and wide enough to envelop Earth [National Geographic News].

The observations were made as part of NASA’s THEMIS mission, which uses the satellites and telescopes to study how solar winds, the charged particles that stream from the sun, interact with the Earth's magnetic field.

On the Earth's dark side, the solar wind stretches out the field, forming a region known as the magnetotail. The magnetotail is like a rubber band; when it is stretched too far, "eventually it snaps and releases the energy", says team member Andreas Keiling [New Scientist].

That snap creates turbulence and forms the tornadoes, researchers announced at the European Geosciences Union meeting. The charged particles in the vortices are propelled towards the earth and collide with particles in the ionosphere, which releases energy and makes the molecules glow in unearthly shades of green and purple. Says researcher Karl-Heinz Glassmeier:

"The Themis satellites have given us our first opportunity to see the process that generates the aurorae in three dimensions and show just what spectacularly powerful events they are" [Telegraph].

While the auroras are beautiful natural phenomena, not all the effects of the solar wind are so benign. Solar storms can damage satellites and pose a real threat to the electric power grid.

A better understanding of all this is needed to improve space storm forecasting and to predict what might happen to power grids. Experts say the next period of maximum solar activity — due around 2012 — could bring a level of storminess not seen in many decades. A recent report by the National Academy of Sciences concluded that a major storm during the next peak could cripple power grids and other communications systems [SPACE.com].