The first step toward the final frontier! 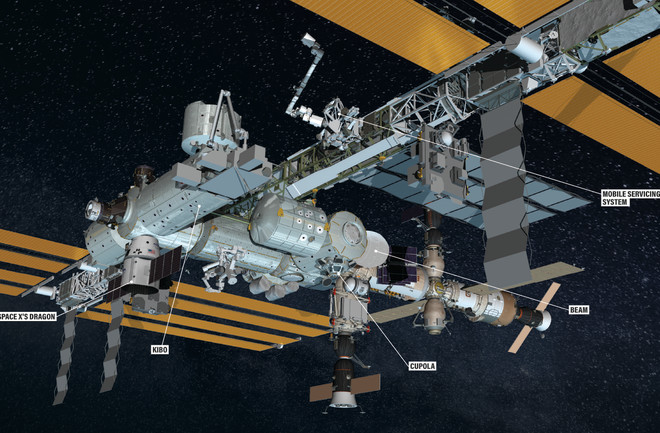 From the first space station, the Soviet Union’s Salyut, in 1971, to the International Space Station (ISS) still circling Earth, these bastions provide safe harbor for human — and plant, insect and rodent — adventurers beyond our atmosphere.

In a nutshell, space station science revolves around what the station largely lacks: gravity. Decades into the space era, we’re still figuring out the harm and help that microgravity can offer, from bone loss in astronauts to ink flow in pens and printers.

Stations also let us test technology longer than the two weeks at a time the space shuttle program could manage. That’s a necessity before we take the long trip to Mars and beyond. And solving space’s challenges can also benefit life back on terra firma: For instance, research into astronaut bone loss can help non-space farers with osteoporosis.

The CUPOLA is the observation area. From seven windows, crew members can help control the station’s robotic arms, or just brush up on their photography skills.

BEAM (the Bigelow Expandable Activity Module) is an experimental section testing the idea of inflating a capsule in space. It's cleared safety tests and still performs admirably, but currently serves as a glorified closet.

KIBO (the Japanese Experiment Module) is the station’s largest habitable module. It holds experiments both inside and outside to study everything from medicine to astronomy to materials production.

SPACE X'S DRAGON is a routine ISS visitor. After docking and delivering its cargo, which will soon include humans, the reusable capsule can ferry loads home to start the process over.

The Future of ISS

By 2024, NASA hopes to divest itself of ISS and turn the station over to private companies. These companies could do research and launch experiments into low-Earth orbit much like they do now, though potentially with more advertising and commercialization. The plan, considered since the Obama administration, became the Trump administration’s preferred choice in February. But there are arguments on all sides against giving up the most expensive object ever built — a project that’s cost taxpayers more than $100 billion. NASA already collaborates with industry, from the research conducted aboard ISS to the cargo now ferried by SpaceX and Orbital ATK. However, transferring the mammoth project would allow the space community to continue reaping the station’s benefits while letting NASA redirect its multibillion-dollar annual ISS budget toward the space station of the future.

2022: NASA plans to launch the first component — a power supply — for Deep Space Gateway, a station orbiting the moon.

2024: SpaceX aspires to use its Big Falcon Rocket to deliver humans to the surface of Mars.

Gateway to the Moon — and Beyond

If humans are to explore beyond Earth’s orbit, they’ll need a place to test new technologies and a base of operations. A station orbiting the moon can provide both. It would be far enough away to serve as a trial run for upcoming deep-space missions, like crewed trips aboard NASA’s Orion capsule, a new spacecraft that could travel as far as Mars. And lunar orbit is close enough to home for repairs and rescues, should anything go amiss.

These goals are driving NASA and fellow space agencies around the globe to build Deep Space Gateway, the first lunar space station. The mission is still being planned, but NASA hopes to launch the power and propulsion systems as soon as 2022, with a pressurized habitation module to follow in 2023 and an airlock and additional pressurized modules afterward.

Orion holds four crew members, so Gateway has to accommodate at least that many. However, this station won’t be continuously inhabited like ISS, and it is unlikely to match ISS’ football-field size. Instead, NASA envisions small crews staying one to two months, with most maintenance and resupply work likely done by robotic missions.

In this way, Gateway’s name and intended use become clear. It will not be a home away from home, like ISS, but a true space station, akin to a train station.

In some ways, Gateway would continue ISS’ work as an all-around science lab, featuring projects ranging from cell biology to astrophysics. In addition to low gravity, Gateway would allow radiation tests from outside Earth’s protective Van Allen belts — a more realistic test for the more distant and irradiated missions of the future.

But the real value would come from Gateway’s prime location and ability to change its orbital path to suit various mission dictates. That might mean low orbits to support astronauts or robots exploring the lunar surface, or flying high to rendezvous with deep-space flights, including those NASA hopes to send to Mars by the 2030s.

Humans won’t stop at the moon. Someday, we’ll go to Mars. And to make Martian trips commonplace — for the same reasons Gateway makes sense — we’ll need a station circling Mars, too. That’s why Lockheed Martin is working on what it calls Mars Base Camp, which might launch as early as 2028. There, astronauts would prepare to set foot on the Red Planet.