Space Station Astronauts Prep for Two Spacewalks in One Week 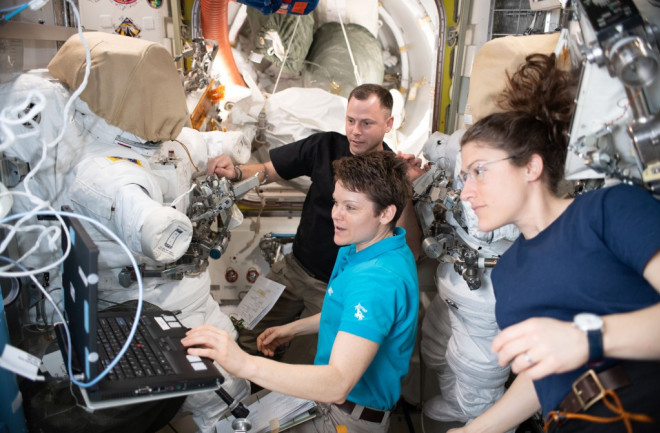 Astronauts Nick Hague, Anne McClain and Christina Koch will venture into space over the next week during two spacewalks. (Credit: NASA) On March 22, two astronauts will take the first spacewalk of Expedition 59 in order to upgrade aging batteries on the International Space Station. The astronauts will be Nick Hague and Anne McClain, and it will be the first spacewalk for both of them. Next week, on March 29, McClain will venture into space again, joined by Christina Koch. This will mark the first all-female spacewalk, a historic event. Koch and Hague joined the space station just last week. For Hague, this was a delay from the aborted Soyuz launch in October. McClain joined the station in December.

The International Space Station has been in use for nearly two decades. While it draws most of its energy from the massive solar panels that make up its distinctive shape, it also must store that energy in rechargeable batteries for when the station orbits Earth’s nightside. The station experiences sunset and sunrise every 90 minutes, whirling above Earth’s surface. Most of the station’s current batteries are nickel-hydrogen, which must be replaced every six years or so, much like any other rechargeable battery. Since 2017, NASA has been replacing them with newer lithium-ion batteries, which hold twice as much charge as the old batteries even at their best. While some of the replacement maneuvers can be done with the space station’s robotic arm, parts of the re-wiring need a human touch. Hague and McClain will start their spacewalk at 8:05 a.m. Eastern Time on Friday, and will spend about six and a half hours outside the International Space Station. McClain and Koch will continue the work on March 29, swapping out more of the old batteries for new ones and connecting them to the station’s power system. In all, NASA plans to swap out 12 of the old batteries for six new ones. Both spacewalks will be livestreamed on NASA's website. Each of the new batteries weigh about 300 pounds on Earth, though in space they weigh nothing at all. They’re still large and difficult to maneuver, so astronauts have practiced their movements in the underwater lab that NASA uses to mimic the low-gravity environment of space. A third spacewalk is planned for April 8, where Hague and David Saint-Jacques of the Canadian Space Agency will install preliminary hardware for a future science platform.