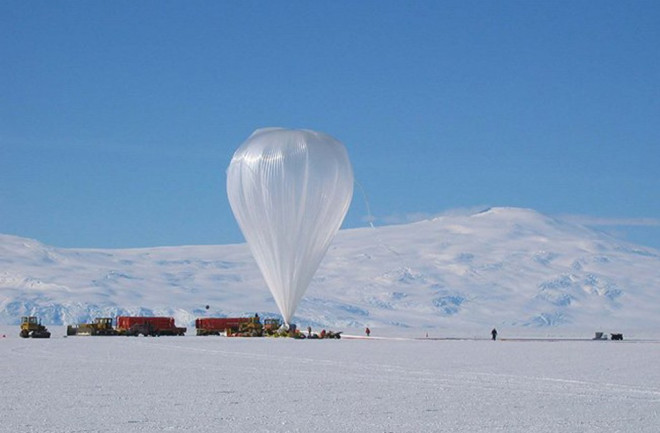 A long duration balloon about to take flight from McMurdo Station in Antarctica. (Credit: NASA) Most of the space news we hear about comes out of the biggest ground-based telescopes and the observatories launched into space. I admit, I’m guilty of focusing on these sorts of news, too. The biggest and most expensive projects are often equipped to touch on a broader amount of science. (Hubble, for example, has cost billions but astronomers have used it consistently for 25 years to study everything from the atmospheres of planets orbiting other stars to the oldest and most-distant galaxies we can see in our universe. The Cassini spacecraft has spent over a decade at Saturn to uncover a diverse and exciting system — including learning that a saturnian moon that might have the right conditions for life.) But astronomers have a much larger bag of tools. One of those is an array of small telescopes working in unison. I’ve touched on one small-telescope setup before for Discover. Another is sounding rockets, with cameras and other detectors launched into Earth’s atmosphere to collect data for a few minutes. And yet another is balloons carrying instruments for weeks at a time. In this post, I want to bring attention to this third one. Climb into the atmosphere The type of light humans see — so-called visible light — makes up only a tiny portion of all types of radiation. Visible light passes right through Earth’s atmosphere, but most other radiation doesn’t. The atmosphere blocks some lower-energy light than what we can see, like infrared, and nearly all of the higher-energy radiation, like X-rays and gamma rays. Balloons are a great way to get your science experiment above at least part of Earth’s atmosphere, so that you have a better chance of catching some of that cosmic radiation. Some balloons can stay afloat for hours, while others remain in the atmosphere for up to 100 days. It all depends on the balloon’s structure. Those with openings at the sides and bottom allow gas to escape as the balloon rises, and so they last for shorter amounts of time and ride the weather pattern. Those with the gas locked in can stay afloat for weeks. (And NASA is currently developing an Ultra Long Duration Balloon, or ULDB, that can fly for about 100 days.) None of these balloons are what you’d find at your local Party City. Instead, most are enormous — like, 40 million cubic feet enormous. (NASA uses the following comparison: a football stadium could fit inside one of these balloons when it’s inflated. Because in America we like sports comparisons.) These balloons need to hold a huge volume of gas in order to lift thousands of pounds of scientific instruments and their electronic brains miles into the atmosphere. Even the smaller scientific balloons are still about a million cubic feet. OK that’s all interesting, but the main question is: have science instruments flying via balloons collected important data? Yes. We know of the telescopes that flew in space to study the universe’s earliest light, called the cosmic microwave background (CMB). And we know of ground-based observatories that also collect this light (like the BICEP2 hoopla from 2014). But some of the most important measurements of the CMB’s tiny variations in temperature were made in 1998 by a balloon flying for 10.5 days, and again in 2003, above Antarctica. That was the BOOMERANG project. Another balloon-flown experiment above Antarctica discovered that the highest-energy particles from space, called ultra-high-energy cosmic rays, can generate pulses of radio light as those particles traverse Earth’s atmosphere. The ANITA project while it was lofted above Antarctica and hanging from a balloon, had detected those radio waves reflecting off the Antarctic ice. And over the past several days, smaller balloons carrying lower loads — these are “only” 90 feet across and carry about 40 pounds of instruments — have been taking off from Northern Sweden for short flights. This is the BARREL project, and the onboard detectors are collecting X-rays to study Earth’s radiation belts. I could talk about dozens more experiments that have flown into Earth’s atmosphere via balloons over the past few decades — but I’ll spare you the details for now. The point is that when you’re hearing about astronomical discoveries and news, know that it’s not coming from only billion dollar telescopes in space and multi-million dollar observatories on the ground. Smaller projects — and many of them built almost entirely by students — are also extremely important tools that we’re using to learn about the universe. SaveSaveSaveSaveSave