Space Rocks are Revealing the History of Our Solar System

Astronomers are forming a more complete picture of the origins of our planet and solar system, thanks to a collection of space rocks that fell to Earth in 1969. 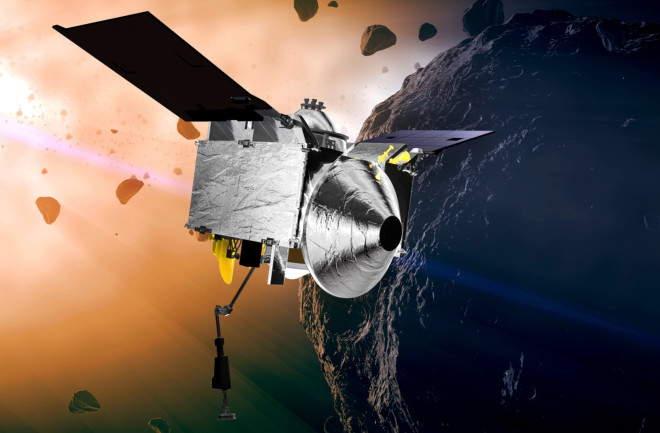 For decades, astronomers have tried piecing together the solar system’s history with insights gained from fallen space rocks. Now, we have the technology — in the form of NASA’s OSIRIS-REx spacecraft, illustrated here — to look for secrets within rocks still in space. (Credit: NASA Goddard Space Flight Center)

The oldest object known to humans fell from the sky on Feb. 8, 1969, with the furor of a divine omen. The blue-white fireball streaked over northern Mexico at 1:05 a.m., ending with a staccato of booms heard from hundreds of miles away. A small asteroid had struck Earth’s atmosphere and exploded — raining thousands of rocky fragments over the desert.

NASA dispatched scientists to the site, and days later they returned with 13 fragments of the space rock. Each was coated with a smooth, glassy rind, the heat of atmospheric entry having melted the exterior. But when the rocks were cracked open, their insides looked pristine: gray-black stone jumbled with numerous white and gray nuggets the size of peas.

The Allende meteorite, named for the Mexican village near the landing site, truly was a portent from heaven. It contained the secrets of our past — exotic materials from our solar system’s birth, and the ashes of stars that died long before our own sun was born. In the 48 years since it fell to Earth, the meteorite has spurred research into our planetary origins, leading most recently to a NASA mission, launched last fall, to collect more of this primitive material right from the source. Scientists are unraveling the oldest story on Earth — and it’s fantastic.

Astronomers have long suspected that our solar system coalesced from a vast cloud of gas and dust. In the beginning, a tiny piece of that cloud collapsed under its own gravity and created the faint protosun. A disk of gas swirling around it eventually formed the planets.

Sounds good for the broad strokes, but the details remained a mystery. What ingredients were in that primordial mix? Could planets really emerge from dust? And did our solar system arise from slow, quiet coagulation — or from unspeakable violence? As astronomers studied Allende, they quickly realized they had some of the answers in their hands.

Ever since the Allende meteorite fell in 1969, scientists have been analyzing its older-than-Earth components. (Credit: Smithsonian Institution Archive)

The key was in the countless nuggets inside the meteorite, which had once tumbled through the ancient protoplanetary disk, bathed in hot gases and dust. Each nugget provided a time capsule, recording conditions from those first several million years when the sun was still forming.

Allende’s white-colored spheres, known as CAIs (for calcium-aluminum-rich inclusion), stood out first. These spheres were rich in metals that remain solid even at extremely high temperatures. The inclusions were sometimes arranged in delicate crystals, with thin whiskers that protruded outward.

This piece shows the white and gray nuggets throughout the Allende meteorite, as well as the rind it acquired during its fall. (Credit: Natural History Museum/Alamy Stock Photo)

“We don’t have any similar objects on Earth,” says Guy Libourel, a cosmochemist at the Côte d’Azur Observatory in France. Scientists of the 1960s surmised that CAIs were the first solid objects to form in the solar system — the first rocks. As the inner regions of the protoplanetary disk cooled below 3,000 degrees Fahrenheit, they reasoned, those elements condensed out of the hot vapor to form delicate mineral crystals, just as the intricate branches of a snowflake condense from water vapor.

Libourel tested these ideas and published the results in 2006, creating the same crystal structures, whiskers and all, out of hot gas in the lab. “[It’s] a strong hint that CAIs came from the condensation of gas,” Libourel says.

Another supporting fact that CAIs are the oldest rocks? Their age. “They are the oldest dated objects,” says Martin Bizzarro, a planetary scientist at the University of Copenhagen. At 4,567,300,000 years old, “they define the formation age of the solar system.”

But CAIs tell only part of the story. Most of the nuggets inside Allende were darker, rich in glassy silicate minerals that form when molten liquid cools rapidly. Scientists suspect they’re the remains of primordial dust clumps flash-heated and melted by shock waves or collisions.

Bizzarro believes these objects, called chondrules, were pivotal to planet formation. The prevailing theory had held that asteroids grew into planets by gathering up fine dust. But large objects like asteroids couldn’t have grown efficiently by sweeping up dust; the tiny particles would just waft away from the approaching asteroid, like a drifting dandelion seed swishing out of the path of an oncoming car.

The early solar system was little more than a faint protosun surrounded by gas, dust and the odd protoplanet, as in this illustration. How those pieces evolved into today’s planets has been a difficult question to answer. (Credit: NASA)

Instead, in 2015, Bizzarro and colleagues published simulations showing that floating pea-sized chondrules would smack into the oncoming asteroid. Through this process, an asteroid just about 30 miles across can grow “all the way up to a Mars-sized body within 3 to 4 million years,” says Bizzarro. Thanks to Allende, we now have a working theory of how the oldest rocks and our planets formed.

Allende plunged to Earth at a pivotal moment in science: It arrived just as NASA was outfitting laboratories to study rocks that Apollo astronauts would bring back from the moon. Those labs turned out to be well suited for analyzing meteorites, too. All told, scientists studying meteorites, moon rocks and cosmic dust have discovered over 70 new minerals never seen on Earth — 15 of them from Allende alone.

But even Allende provides an imperfect view of the protoplanetary disk, since the space rock could have been altered during its fiery fall to Earth. So the study of our solar system’s origins is entering a new phase: retrieving samples directly from space.

A close-up of an Allende meteorite fragment shows the white calcium-aluminum-rich inclusions and the darker chondrules. Scientists believe the former are the first rocks in the solar system, and the latter helped form the planets. (Credit: Chip Clark/National Meteorite Collection/Smithsonian Institution)

Last September, an Atlas V rocket blasted off from Cape Canaveral, Fla., with a 4,650-pound space probe in its nose known as the Origins, Spectral Interpretation, Resource Identification, Security-Regolith Explorer — or just OSIRIS-REx. The NASA spacecraft will begin approaching a small asteroid named 101955 Bennu, roughly a third of a mile across, in September 2018. Observations from Earth-based telescopes suggest that Bennu is rich in carbon, with a composition similar to Allende and other primitive meteorites.

After spending one year mapping Bennu’s surface, OSIRIS-REx will drift down to a carefully chosen spot — within the lip of a shallow crater would make sense, since materials there are more shaded from the sun’s destructive radiation. The spacecraft will touch down for several delicate seconds, jet nitrogen gas into the asteroid’s surface, catch the stirred-up gravel and dust, then lift off again.

NASA technicians and engineers work on the Origins, Spectral Interpretation, Resource Identification, Security-Regolith Explorer (OSIRIS-REx), which launched last year. The plan is for it to briefly touch down on asteroid Bennu, stir up dust and capture a sample (illustrated at right), before returning it to Earth in 2023. If successful, it’ll provide scientists at least 2 ounces of genuine space rock to study. (Credit: NASA/Dimitri Gerondidakis)

If all goes well, OSIRIS-REx will return to Earth in 2023 with at least 2 ounces of material from Bennu. It will be only the second sample ever returned from a primitive, carbon-rich asteroid — and by far, the largest. (Hayabusa2, a Japanese mission, is expected to return from another asteroid in 2020, with around three-millionths of an ounce of dust.)

For people trying to peer some 4.57 billion years back in time — assuming Bizzarro’s numbers are correct — this will be nothing short of a revolution. For decades, scientists had to make do with whatever random rocks happened to hit Earth, not even knowing where they came from. “[It’s] like if you are a geologist and you only receive rocks by mail, and you never go into the countryside,” says Libourel.

For the first time, NASA is finally venturing out, visiting one of the oldest objects in the solar system — older than the planets themselves — and returning home with a piece of that ancient history. “This,” says Libourel, “will be very, very, very important.”

Douglas Fox is a science journalist who also writes for National Geographic, Nature and Scientific American.

[This story appeared in print as "Our Rocks, Ourselves."]