Some Exoplanets Could Have Greater Biodiversity Than Earth 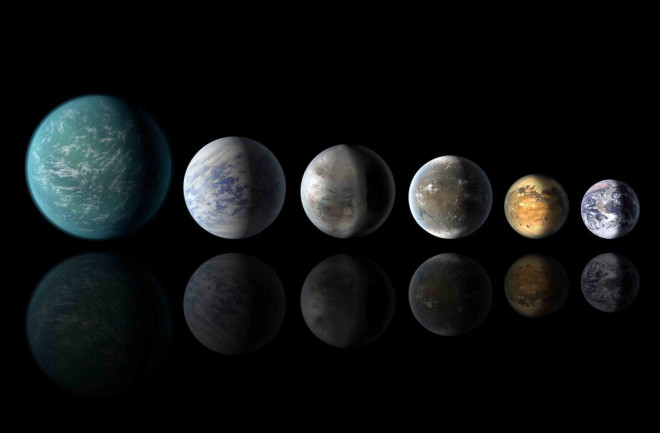 When you stack up the most promising recent exoplanet finds, as illustrated here, it becomes clear none is Earth’s true twin. But even more habitable worlds may be out there waiting to be found. (Credit: NASA/Ames/JPL-Caltech)

Earth is the only place in the universe where we know life exists. But with billions of other star systems out there, it might not be the best place for life. In a new study, astronomers modeled the potential for life on other watery planets and found some conditions that can create oceans maximized for habitability.

The model suggests that watery planets with dense atmospheres, continents, and long days — slowly rotating planets that is — were most conducive to life. These conditions stimulate ocean circulation, which brings nutrients from the depths to the surface where it’s available for biologic activity.

“[The research] shows us that conditions on some exoplanets with favorable ocean circulation patterns could be better suited to support life that is more abundant or more active than life on Earth,” Stephanie Olson, a University of Chicago researcher who lead the new study, said in a media release.

To date, over 4,000 exoplanets have been confirmed, and a handful of those worlds orbit at a safe enough distance from their host star to have liquid water on the surface. These habitable zone planets are at the forefront of the search for alien life and the new research, presented Friday at the Goldschmidt Conference in Barcelona, Spain, will help astronomers narrow down that search.

Previous studies looking at exoplanet habitability had largely neglected the role that oceans play in regulating global climate and heat transportation. The researchers focused in on this niche, using a computer model to compare different combinations of climates and ocean habitats that could exist on exoplanets across the galaxy. The study aimed to look for things like upwelling, a type of ocean circulation driven by wind.

A NASA astronaut captured this view from the International Space Station looking north past Cuba toward the United States. (Credit: NASA)

Upwelling and ocean circulation have long played a major role in sustaining life in Earth’s oceans. And since the oceans and atmospheres are interlinked, the evolution of life in the oceans has been reflected in certain chemical changes in the atmosphere. It’s unlikely astronomers will directly see life on other planets, but seeing these so-called biosignatures in exoplanet atmospheres could be possible with the next generation of telescopes. Ultimately, this research will help scientists select the best candidates out of the growing census of exoplanets for follow up study.

“One of the things we don’t really understand particularly well in the exoplanet community is how oceans on some of these planets might be working,” said Chris Reinhard, professor at the School of Earth and Atmospheric Sciences at the Georgia Institute of Technology, who was not involved in the new study. “Part of that is because we haven’t had the computer models or people working on them to really explore these things, so there’s a lot to learn. This is a really huge step in the right direction to figure some of those things out.”