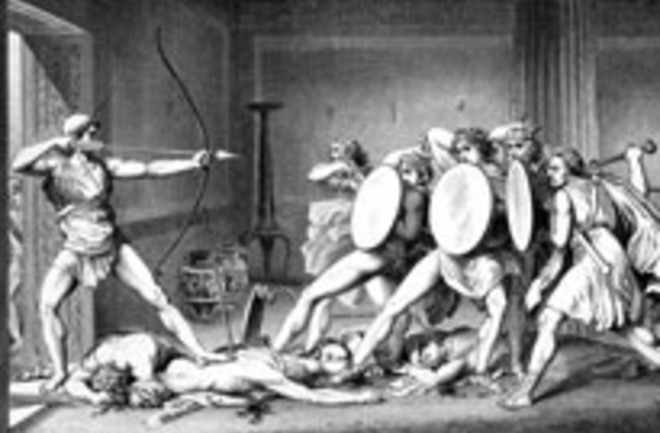 On April 16, 1178 B.C. a total eclipse blotted out the sun at high noon; astronomers know that much for certain. The other events of that day are considerably less definite, but researchers say the date may also figure large in Homer's Odyssey, the epic tale of Odysseus's journey home to Ithaca after the Trojan War. Using astronomical clues from the text, researchers say that Homer may have indicated that the day of the eclipse was also the day that Odysseus finally reached home--arriving just in time to slaughter his wife's persistent suitors.

While the researchers believe they've arrived at the proper date for Odysseus's homecoming in the Odyssey, they don't claim to have proven that all the events in the epic are real; it is, after all, packed with gods, monsters, and magic. But researcher

"Under the assumption that our work turns out to be correct, it adds to the evidence that he knew what he was talking about," Magnasco said. "It still does not prove the historicity of the return of Odysseus," he said. "It only proves that Homer knew about certain astronomical phenomena that happened much before his time" [AP].

Researchers looked for references to constellations and planetary positions in the text, and tried to make them match up with known astronomical patterns of past centuries. As they report in

the forthcoming issue of Proceedings of the National Academy of Sciences

[subscription required], they found references to the positions of Mercury and Venus during the final months of Odysseus's journey, as well as a description of two constellations, Pleiades and Bootes, being both visible at sunset. Magnasco and his coauthor, Constantino Baikouzis, says these conditions all existed in the early spring of 1178 B.C. The evidence that Odysseus's homecoming occurred on the day of the eclipse is somewhat circumstantial. The researchers note that there are references to a new moon on the day of Odysseus's return, which is a precursor for a solar eclipse. But the poem contains no direct reference to an eclipse on the day when Odysseus returned to his faithful wife, Penelope, and struck down the suitors.

Instead, there's a literary flourish that could be interpreted as a reference to the sun's disappearance. As the suitors are sitting down for their noontime meal, the goddess Athena "confounds their minds" so that they start laughing uncontrollably and see their food spattered with blood. Then the seer Theoclymenus prophesies their death and passage to Hades, ending with the phrase: "The Sun has been obliterated from the sky, and an unlucky darkness invades the world." The Greek historian Plutarch interpreted this as signifying a total solar eclipse, and many others have agreed [Los Angeles Times].

Trying to reconcile ancient literature with historical fact is a risky proposition, and even the researchers advise taking their hypothesis with a grain of salt. “The notion that the passage could refer not just to an allegorical eclipse used by the poet for literary effect but actually to a specific historical one,” they agreed, “seems unlikely because it would entail the transmission through oral tradition of information about an eclipse occurring maybe five centuries before the poem was cast in the form we know today”

[The New York Times]. Homer is thought to have put the legends of Odysseus into poetry around 850 B.C.