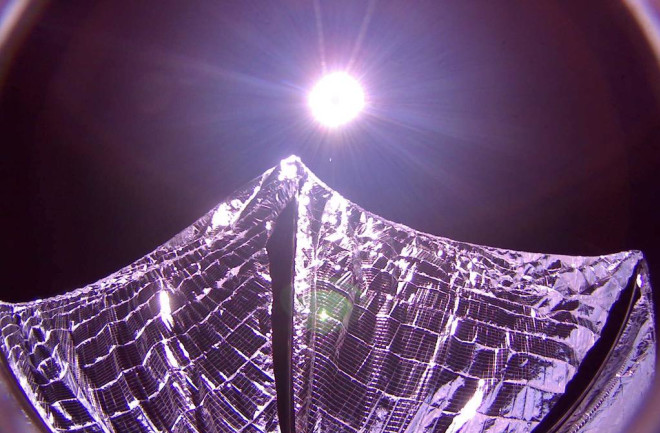 Lightsail in space, released 9 June 2015. Courtesy Planetary Society It hasn’t been entirely smooth sailing for LightSail, but on Sunday its tribulations came to a happy conclusion. Since its launch on May 20, technical glitches prevented the LightSail satellite from accomplishing its one and only task: unfurling four massive Mylar sails that, theoretically, could harness energy from the sun to propel the spacecraft through space. The satellite is a prototype, meant to serve as a proof of concept for this design of spacecraft. And finally, at 3:47 p.m. EDT Sunday, LightSail sprung to life and all 344 square feet of its sail opened up to the vast expanse of space.

LightSail in a Nutshell

If you haven’t been following the LightSail saga, a little catch-up is in order. The satellite is a citizen-funded project spearheaded by the Planetary Society, a non-profit organization headed by Bill Nye, the “Science Guy.” Decades ago, astronomer Carl Sagan envisioned a spacecraft that could travel through space without relying on fuel, and LightSail is the modern version of his concept. LightSail’s propulsion system works on similar principles as a sailboat here on Earth, but instead of wind gusts filling the sails, radiation and photons emitted from the sun push LightSail through space. Light pushes the sail continuously and the spacecraft increases its speed over time. If successful, the Planetary Society’s solar sail concept could drastically reduce the cost of deep space travel, since no propellant is needed to operate the spacecraft.

The Planetary Society had one goal for the LightSail prototype on this first mission: unfurl the sails. Engineers wanted to prove it was possible deploy a massive sail, thinner than the width of a human hair, in space. Although simple in concept, it proved more difficult than the team anticipated. A few days after the launch, LightSail stopped communicating with its Earth-based flight controllers due to an unexpected software glitch that overwhelmed its systems. After eight days of silence a deep-space cosmic ray, a blast of high-energy radiation, snapped LightSail out of its slumber. Then, just a few days ago, LightSail ran into another set of problems locking its solar panels into place, an operation independent from deploying the sail, and engineers quickly drew up a reboot. Clearly, the second reboot worked, and the sail opened up.

This year’s mission was just a preview for the real deal, scheduled for a 2016 launch. During this mission, LightSail will be fully deployed, and engineers will at last determine whether the spacecraft’s sails can actually catch solar winds and race through space. No doubt data gathered during the first test mission will help the team iron out a few wrinkles they encountered. Space travel isn’t easy, and devising an entirely new propulsion system adds another layer to this already daunting challenge. But today, the Planetary Society deserves a global pat on the pack for taking a bold first step into a new era of deep space exploration.