Somehow, I almost missed telling you that there will be a solar eclipse on Monday! But there are two things you should know: it's annular, and you probably won't see it. 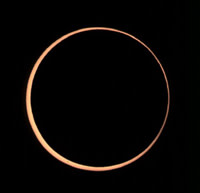 Annular eclipses happen when the Moon is at or near apogee, the point in its orbit when its farthest from Earth. It looks a bit smaller because it's farther away, so it doesn't cover the Sun completely. In this case, the eclipse is happening near perihelion, when the Earth is closest to the Sun, so we're maximizing the effect: the Moon looks small and the Sun looks big. When this happens, the Moon leaves a ring of sun around it, called an annulus (Latin for ring). Hence annular. Also, this eclipse happens mostly over the vast nearly empty Pacific Indian Ocean, so it's not a great one to get lots of folks to see it. A partial eclipse will be seen over south Africa, Australia, and Indonesia, so that's cool. For them. It'll be snowing here in Boulder. Sigh.