Reflections on a new case of apparent data manipulation. 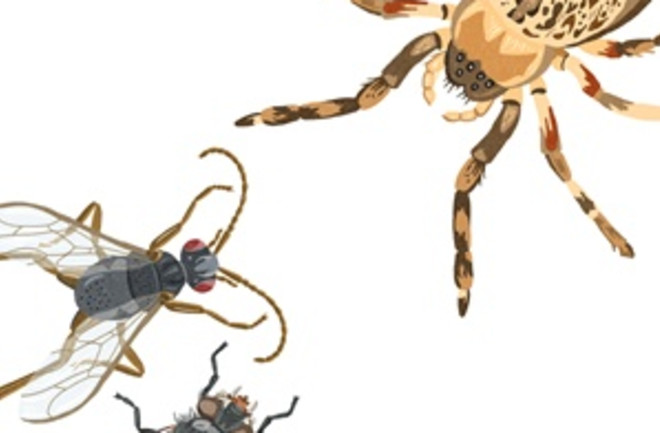 A case of widespread scientific fraud appears to have been uncovered in the world of behavioural ecology, as a researcher is accused of data manipulation in numerous papers about the lives of social spiders.

As Nature News puts it,

A complex web is unravelling in the field of spider research. On 5 February, McMaster University in Hamilton, Canada, confirmed that it was investigating allegations that behavioural ecologist Jonathan Pruitt fabricated data in at least 17 papers on which he was a co-author.

A detailed and devastating blog post by Kate Laskowski, a former collaborator of Pruitt, appeared three weeks ago that makes clear the seriousness of the problem.

Laskowski explains that last year, she was prompted to take another look at a dataset which Pruitt had sent her in 2014, and which was published as a paper in 2016. Close inspection revealed the presence of repeated patterns of values, as illustrated here:

The colors (added by Laskowski) show repeated 'blocks' of data values in the spreadsheet, for which there is no scientific explanation

The duplicated datapoints made up fully 73% of the dataset, Laskowski says, and with the agreement of her coauthors (including Pruitt), she decided to retract the paper. She also retracted two other papers with Pruitt after finding similar abnormalities in other datasets.

Although Laskowski doesn't explicitly say this, it's clear that the data she presents are not just abnormal: they are manipulated. I can't see any way that these anomalies could arise in 3 different datasets except if Pruitt were a serial data fraud.

What's interesting about this case is that Pruitt seems to have had a similar modus operandi to other famous serial frauds. Namely, he operates by providing data to (completely innocent) collaborators who approach him with ideas for experiments.

Laskowski describes how she met Pruitt at a conference and told him that social spiders - which Pruitt studied - would be an ideal organism to test the 'social niche specialization hypothesis'. The two discussed how to design an experiment that would answer this interesting question.

Eight months later Jonathan sends me a datafile containing the behavioral data he collected on the colonies of spiders testing the social niche hypothesis.

In other words, Pruitt acted as a kind of experimental consultant who carried out studies (or claimed to) suggested by others. The collaborators provided the scientific idea, and Pruitt gave them a completed dataset to analyze.

Now, this sounds very similar to the story of the fraudster Diederik Stapel. Stapel was a star in the world of social psychology who ended up retracting nearly 60 papers after his data fabrication was revealed in 2011. Like Pruitt, Stapel was in the habit of providing datasets (full of exciting results) to innocent collaborators:

[Stapel] would discuss experimental designs in detail with collaborators and would claim to conduct the surveys at high schools and universities with which he had special arrangements.

In other instances, the report says, he told colleagues that he had an old data set lying around that he hadn’t had a chance to analyze.

Another similar case was the physics fraudster, Jan Hendrik Schön of Bell Labs, who published a flurry of high-impact work before his dismissal in 2002 after it became clear he'd been making up data. Like Stapel and Pruitt, Schön had many collaborators to whom he provided data:

What about the co-authors? Kloc had been handing over beautiful molecular crystals, the best in the world at the time, to Schön, but it is not unusual for a material supplier not to witness resulting measurements or analyze resulting data first hand. Likewise, Zhenan Bao had been providing molecules for SAMs, but had also never actually gone to Schön’s lab to see the data coming in. Scientific collaborations are built on trust, and that led to vulnerabilities in this case.

Not all scientific fraudsters operate in this collaborative way. Some are content to make up data for their own experiments, working with only a few co-authors (students and mentors), or none at all.

Collaborative (or "social" fraudsters) seem to be more successful than the "private" kind, at least such in my impression. Perhaps this is because good ideas for experiments are not that easy to come up with. A fraudster who can take good ideas from others and then provide (fake) data to support them is able to benefit from the creativity of others.