So You Want to be a Ranger at Virunga National Park? 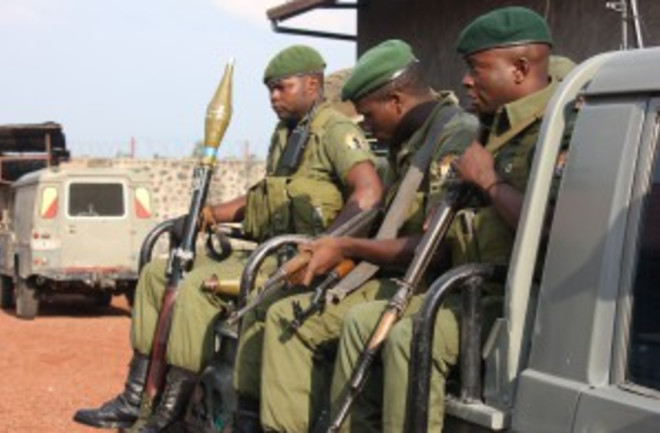 Rangers prepare for patrol in the southern section of the park. (Image: Jeffrey Marlow) Getting a job as a ranger at Virunga National Park, the contentious jungle set among steaming volcanoes in the eastern Democratic Republic of the Congo, is not easy. Innocent Mburanumwe should know – as the Warden of the Park’s southern sector, he oversees 140 rangers and helps pick each new crop through an intensive selection process. First are the challenges of brute force: running several miles while carrying a heavy pack, and climbing 14,000-foot mountains in less than a day. There are tests of survival skills and orienteering through one of the most dense forests on the planet. Then come the more nuanced abilities: marksmanship, spotting small camoflauged objects through binoculars, and an exam to identify and describe various animals and plants. And finally, there’s the interview, where the selection panel tries to get to the root of the most important question: how much do you really care? Is this just a job to you, or something more, something for which you’re willing to risk your life? With each task, scores are tallied. Some bail early, blanching at the sight of a gun, or throwing in the towel after the grueling hikes. For those that complete the assessment, the average grade hovers around 40%. 60% is frequently good enough for a pass; Mburanumwe tallied an 85%. Despite the intensity of the process, the title of Virunga Park Ranger is becoming increasingly aspirational. Last year’s acceptance rate plummetted to just 10%, and Mburanumwe views the increasing quality and number of applicants as a sign that the Park’s mission is resonating with surrounding communities. “At the beginning it was very hard,” he recalls; “people didn’t want to just be protecting trees.” With meager pay and a faltering sense of mission, some rangers were reported to occasionally enable armed roberies or pillaging of Park resources. “But now they understand,” Mburanumwe explains, “and people are very eager to be a ranger. Everyone wants to be a ranger because they are seen to be very good at their job.” Mburanumwe’s domain includes the famed mountain gorillas, the critically endangered great apes that romp around the volcanoes’ bamboo forests. The Virunga population is split between the DRC’s Virunga National Park and Volcanoes National Park in Rwanda – many of the mountain summits form the border between the countries, and as Mburanumwe quips, “gorillas don’t have passports.” A second group of mountain gorillas lives at lower elevations in Uganda’s evocatively named Bwindi Impenetrable National Park. Because the animals are so threatened – and because they are a lynchpin of three countries’ tourism economies – they’re remarkably well tracked. Roughly a quarter of the gorilla families are habituated, meaning they tolerate human visitors, often with impassive, unimpressed stares. These groups enjoy medical treatment and a higher population growth rate, but scientists want to maintain substantial unhabituated populations, lest human diseases – which have been known to cause gorilla deaths – run rampant through the habituated families. At Virunga’s Bukima station, four families roam the hills, contained to virgin forest by wire fences in an attempt to minimize “misunderstandings” between the animals and local farmers. Each evening, park rangers record the GPS coordinates of the family they’ve been tracking; in the morning, they return to the point and follow the trail of felled shrubs to revisit the crew, which is likely enjoying a lazy morning, sprawled out in beds of leaves. This advance team radios back to the station, telling tourist-minding rangers where to go. The trek to find the gorillas can take anywhere from 15 minutes to four hours. When spending time with the animals, the battle-tested, elite Virunga rangers soften, smiling reflexively beneath the surgical masks required to minimize the chances of disease transmission. “These animals are so amazing,” Mburanumwe says. “It was a switch in my mind – after seeing them, I knew I had to do everything possible to protect them.”