Probably not a whole lot. 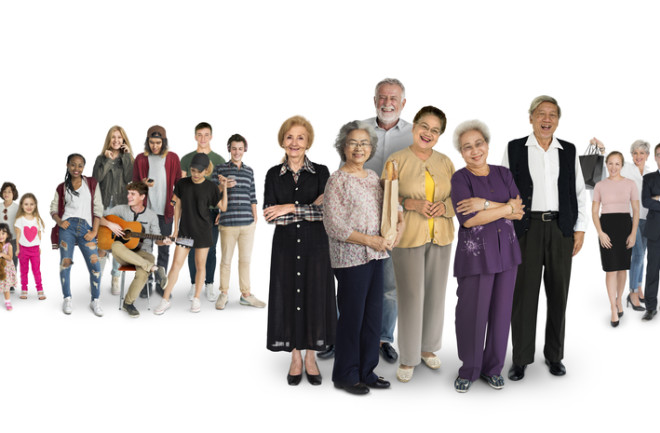 We all know how old you have to be to get a beer in the U.S. The rule is so hard and fast, bars post the exact date (21 years prior to the current day) to determine who can place an order on a given night. But placing a birth year within a tidy set of generational characteristics? That's a trickier concept. Yet whichever generation you fall into comes with its own set of consequences.

Gen X? You're the savvy and skeptical one. Millennials? Congrats, you've been called a narcissist so many times, you're now embarrassed by it. These labels stick, along with a host of other assigned generational habits and trends. But a growing number of researchers are finding that generational stereotypes don't hold up to scrutiny.

“We’ve drawn the parallel before that this is sort of like horoscopes,” says Cort Rudolph, a psychologist at Saint Louis University. You give groups of people a label, assign qualities to that label, and treat the concept with legitimacy — whether it be marketing campaigns based on horoscopes or a headline claiming that “Millennials” have destroyed 25 different industries. "It’s like sanctioned, pseudo-scientific stuff.” Though these labels are easy to latch onto, our workplaces, policies and even relationships might be better off if we let them go.

Where'd This Come From?

The original use of the word generation comes from science. These biological generations group offspring based on how far they have descended from one common relative. If you’re looking at a family tree, each horizontal line of faces and names is one generation. But now we also have a social definition of a generation — everyone born within a range of years that (supposedly) carry with them a set of traits distinguishing themselves from the cohorts before and after them.

Psychologists often peg the development of this latter definition to the early 1900s. That’s when sociologists first asked hypothetical questions about whether cohort after cohort drove social change, with each younger crew challenging the beliefs held by elders. This concept was supposed to be a thought experiment, Rudolph says. But over time, the media and researchers alike put more stock in the idea: That when people live through momentous changes in our culture at a young age, those events define who they become and what they believe.

When you think about the concept critically, the theories or supposed evidence that support the idea of how any one generation behaves seem shaky, Rudolph says. For starters, there’s the premise that because a cohort experienced pivotal cultural moments while in their formative years, they will all have the same attitudes. The Silent Generation, which grew up during the Great Depression, developed a “propensity to save” as a result, according to some financial service companies. But that and similar generation-specific behavior arguments claim everyone’s response to a scenario is identical, a hard argument to make under any circumstances. “That makes a lot of assumptions that people couldn’t vary,” Rudolph says. “It’s too rigid a way of thinking about behavior.”

Additionally, research attempting to study the attitudes of people from different generations can’t tell the supposed generational effects apart from plain old age. Someone’s birth year is synonymous with how old they are. If you build a statistical model including either of those data points, they dictate the same thing, Rudolph says — it’s not possible to know whether the result is due to how old someone is or when they were born.

For example, a range of generations are equally committed to or interested in their workplace. Those who are older — and of older generations — are slightly more satisfied with their jobs. But is that because “easily satisfied” is part of their generation’s description? Or is it because older people have already had the chance to ditch a different career they didn’t like?

Where To Find Real Trends

If you want a better predictor of what someone is likely to believe or do, look to other details about their life. George-Levi Gayle, an economist at Washington University, pointed this out in some of his recent analyses of education levels, income, marriage rate and other life factors from the Silent Generation up to Millennials. People who share specific qualities — like those with college degrees — resemble each other more than people who happen to be born in the same era.

And when people see supposed trends within a generation, those are probably due to these other, influential factors becoming more or less common. “A lot of times, it’s not that the generation is changing — but the composition of the generation is changing,” Gayle says. For example, headlines will claim that millennials are having fewer kids. But a higher percentage of millennials have college degrees compared to Baby Boomers or Gen X, and college-educated individuals generally delay childbirth. This could help explain why Millennials between 18 and 30 had the lowest fertility rates of all generations when they were in those years of their lives, but 31 to 35 year-olds had higher fertility rates than Gen X did when they were in the same age bracket.

For Millennials specifically, even the concept of the average member of the generation holds less meaning than it did with previous groups. Over the decades, wealth inequalities in the U.S. have gotten larger. Gayle found that between 1968 and 2015, the amount of money Black women have earned in comparison to white women has kept a consistent ratio. For Black men and white men, however, the gap between their incomes has widened.

With an ever-expanding range of assets, the average Millennial represents a smaller percentage of the overall population than the average did in earlier decades. “There’s a lot of policy changes that happened in the '70s, '80s and '90s that are hitting them in disproportionate ways,” Gayle says. “So we see the gap widen between the haves and have-nots in this generation.”

A Too Influential Concept

Both Gayle and Rudolph work with people who like (or want) to tailor their services to specific generations. For Gayle, it’s policymakers or people in think tanks who ask if they can shape plans or ideas around what a specific generation wants. In his eyes, this approach can flatten policy choices that don’t end up serving as many people as their authors think they do.

Rudolph works with people who are trying to build and run functional workplaces and knows of companies that try catering to the needs of Boomers versus Millennials. He generally doesn’t recommend that tactic: “That’s kind of a liability, because ultimately what you’re doing is thinly veiling this ageist process.” Instead, companies can offer benefits and cultures that appeal to everyone. Employees of all ages like some degree of autonomy at work, research has found, and flexible schedules in terms of office hours and work-from-home.

Not only could focusing on what makes generations different lead to sketchy workplace strategies, but the contrasts breed conflict. There’s a tendency to illustrate other generations as problematic, Rudolph says. Millennials are entitled, or Boomers hog resources. And when you hear it enough, you start to practice it. There's even a term in psychology, the Pygmalion effect, that speaks to the way people adopt the traits they're told they have.

“People embody these things,” Rudolph says. “If you treat people in a specific way because you assume they’re whatever, that’s a problem.”