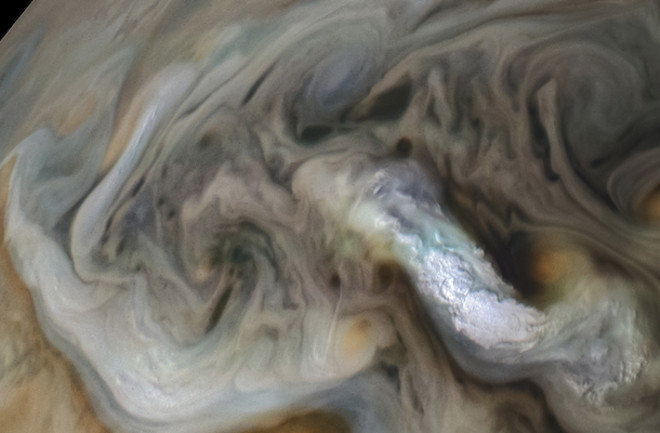 Looking a bit like earthly thunderheads, a white band of high-altitude clouds emerge above the colorful, swirling patterns of Jupiter in a photo taken last summer by NASA’s Juno spacecraft. Jupiter, the solar system’s largest planet, has no Earth-like surface. Instead of an outer crust, the gas giant consists mainly of hydrogen and helium that condenses into liquid the deeper you go, all wrapped in an atmosphere of clouds made up of ammonia ice, ammonium hydrosulfide crystals and ice water vapor.

Measurements taken by Juno suggest the atmosphere extends nearly 2,000 miles below the gaseous surface. The solar-powered spacecraft eased into a 53-day orbit around Jupiter in 2016 for a mission expected to last into 2021.

[This story originally appeared in print as "High Clouds on Jupiter."]