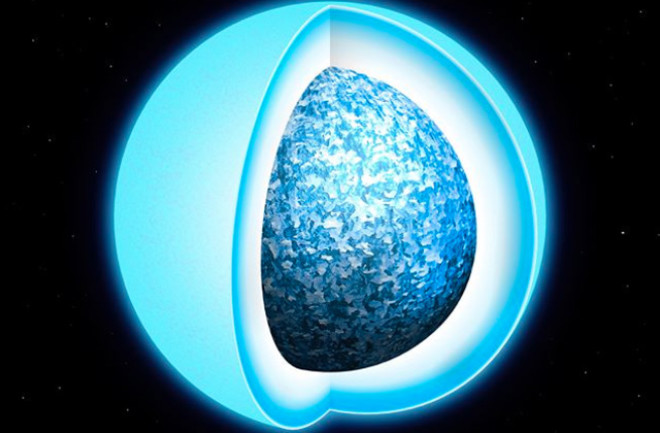 One of Discover's favorite space artists and regular contributors, Mark Garlick, created this impression of a white dwarf star solidifying to accompany the announcement. (Credit: University of Warwick/Mark Garlick)

Stars like our sun can turn into crystals in the final stages of their lives, bringing a whole new meaning to those glittering jewels in the sky. Astronomers from the University of Warwick say they’ve found the first direct evidence that white dwarf stars – the dense, stellar corpses of stars like our sun – can crystallize, or turn from a liquid into a solid. The discovery was published Wednesday in the journal Nature.

Astronomers had long suspected such crystallization was possible. But to find direct evidence, the team turned to data gathered by the European Space Agency’s Gaia satellite and analyzed some 15,000 white dwarf candidates. In the process, they uncovered a “pile-up” of stars with colors and luminosities that matched those predicted for crystallized white dwarfs.

The discovery, led by physicist Pier-Emmanuel Tremblay, was announced exactly 50 years after it was first predicted.

“All white dwarfs will crystallize at some point in their evolution,” Tremblay said in a media release. “This means that billions of white dwarfs in our galaxy have already completed the process and are essentially crystal spheres in the sky. The sun itself will become a crystal white dwarf in about 10 billion years.”

White dwarfs are extremely dense stars, so the positively charged nuclei in their cores exist as a fluid, the scientists say. But as the star cools, that fluid solidifies and creates a metal core. And because white dwarfs are among our cosmos’ oldest stellar objects, with predictable life stages, astronomers often use them as “clocks” to date surrounding groups of stars. So understanding this crystallization process could bring greater accuracy when scientists assign ages to the stars.