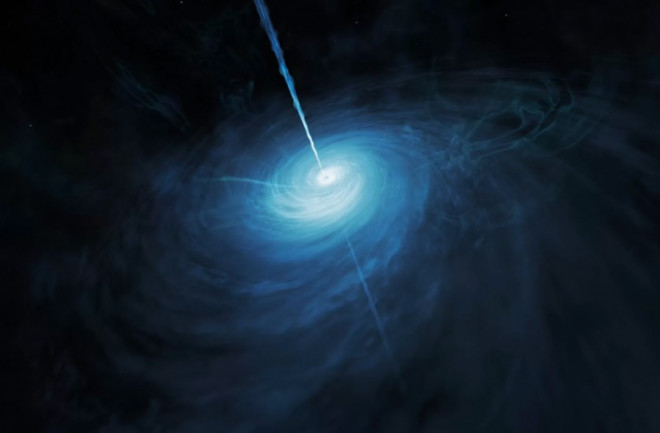 Astronomers spotted the brightest quasar ever discovered in the early universe, as depicted in this striking artist’s impression. And now it’s offering astronomers a rare zoomed-in glimpse at how the earliest galaxies formed.

Quasars are active supermassive black holes that lurk at the centers of galaxies. As they feed on nearby material, these black holes launch extremely bright jets out into the cosmos.

A team of astronomers led by Xiaohui Fan of the University of Arizona spotted this object, dubbed J043947.08+163415.7, using observations from ground-based telescopes in Hawaii. A stroke of luck aided in the discovery. While the quasar shines as bright as 600 trillion suns, it also sits a whopping 12.8 billion light-years away. So it was only visible because the gravity from an intervening galaxy bent and magnified the quasar’s light, an effect called gravitational lensing. That boosted its brightness in our earthly instruments by a factor of 50.

But even then, it took observations from the Hubble Space Telescope to get an image clear enough to resolve the system.

Looking far out into space means looking back in time, and this particular quasar is ancient indeed, appearing shortly after very first light emerged from the Big Bang.

“Prior to this, no stars, quasars, or galaxies had been formed, until objects like this appeared like candles in the dark,” team member Jinyi Yang noted in a press release.

The results were published earlier this month in The Astrophysical Journal Letters.