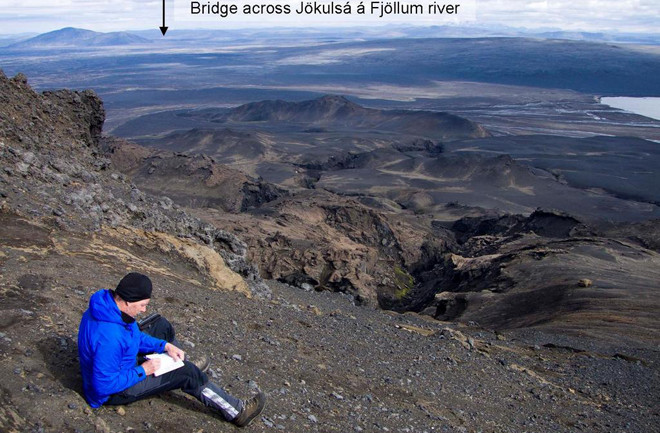 The region around Bardarbunga seen from the slopes of Askja. Photo by Dave McGarvie, used by permission. Ruv.is is reporting that a small subglacial eruption has begun at Iceland's Barðarbunga after a week of seismic unrest. It appears that the eruption is occurring under about 500 meters (1640 feet) of ice. Airspace over the volcano has been closed with the alert raised to red and more evacuations are occurring apparently no evacuations are occurring. Here is the IMO statement on the eruption. There is very little in the way of details right now, but I will update as I find more information. Big take-home message so far is that the eruption appears to be small and under the ice. If/when it melts through the ice (which Dave McGarvie guesses might take a few hours), we might seem some explosive activity. However, right now, this is not a repeat of Eyjafjallajökull 2010 or Grimsvötn 2011. UPDATE 4:45 PM EDT: Stop the presses! Magnús Tumi Guðmundsson now says that it is unlikely that an eruption occurred today near Barðarbunga. Since the "eruption" was subglacial, the evidence an eruption was occurring was seismic - this is, the tremor and seismicity looked like what you might expect if lava was interacting with ice. However, we have no seen any other signs of an eruption, including anything at the ice surface or any strong increase in meltwater from under the

Dyngjujökull glacier, where the earthquake swarm is centered.

Some geologists in the IMO still think a very small eruption could have occurred, but it appears that if anything did happen, it is still ambiguous. Seismicity is continuing around the volcano, but we may not have actually had an eruption today - one of the problems when trying to monitor a volcano under half a kilometer of ice. If an eruption did occur, it does not seem to be ongoing according to the Icelandic Meteological Office - and even if it was, it could be up to 20 hours before any lava is spotted as it melts its way through the ice. Check out the webcams to see if you can spot anything: Mogt.is and Mila.