The laws of physics seem stacked in our favor. How did we beat the odds?

Astronomers often focus on the many hazards that menace us from outer space, ranging from bull's-eye asteroids to high-speed subatomic particles. Lately, however, more and more researchers have been taking the opposite perspective. They are trying to understand why the universe is so benevolent, providing conditions that are nearly perfect for human life.

Evidence of happy coincidences is everywhere. Anyone who has access to a good-size amateur telescope can spot a small patch of glowing gas in the constellation Taurus, nearly overhead around 9 p.m. this month. This is the Crab nebula, the remains of a star that blew itself to kingdom come. If Earth had been nearby when this supernova exploded, we all would have been toast. And yet such exploding stars created the oxygen, carbon, silicon, and iron that make up much of our world and our bodies. If earlier generations of detonating stars had not seeded interstellar space with those elements, we would not exist. By the late 1960s, scientists recognized that the entire cosmos exists in a similarly delicate balance. Had the Big Bang been one part in a billion more powerful, it would have rushed outward too quickly to allow galaxies to form. Even more remarkable, the four forces that govern the interaction of matter and energy have just the right properties to allow atoms to bond together into compounds, clump together into planets, or crash together to generate nuclear energy inside stars.

In a paper published in 1961, Princeton University physicist Robert Dicke suggested an explanation for the apparent fine-tuning of the universe. The British astrophysicist Brandon Carter elaborated on Dicke's argument in 1974 and dubbed it the anthropic principle: "What we can expect to observe must be restricted by the conditions necessary for our presence as observers," he said. If the universe were drastically different, we would not be here to think about it. Since we are here, the universe had to be the way it is.

That reasoning is now known as the weak version of the anthropic principle. Carter also described a strong anthropic principle: The universe must have properties that allow life to develop because it was designed to generate observers. John Wheeler, the physicist who coined the term "black hole," has long supported this view. According to what he calls the participatory anthropic principle, observers must exist because the act of observing brings the universe into existence.

Many scientists now gingerly embrace the weak anthropic principle. "Used appropriately, it has some predictive value," says astronomer Alex Filippenko of the University of California at Berkeley. "Small changes to seemingly boring properties of the universe could have easily produced a universe in which nobody would have been around to be bored." A fashionable cosmological theory gets around that puzzle by proposing that our universe is one of infinitely many, each having slightly different physical properties. We inevitably live in a non-boring universe suited to our peculiar kind of life.

Philosopher John Leslie of the University of Guelph in Ontario cites the firing-squad story: A man in front of 50 riflemen would be pretty surprised if every bullet missed him. He might conclude that he is popular with sharpshooters—or he might consider that there could be immensely many firing squads at work in immensely many different universes. The man contemplating his incredible good luck might be among the very rare survivors, oblivious to the bad luck all around. 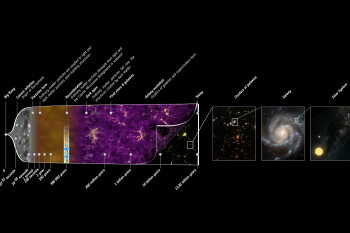 The SciencesDoes the Universe go on Forever?