Skin color is not race

One of the peculiarities of American discussion about race is that skin color is assumed to be synonymous with racial distinctions. That is, skin color is not just a trait, but it is the trait which defines between population differences. There’s a reason for this, the skin is the largest organ and it is very salient. Populations with little phylogenetic relationship to each other, from India to the Pacific to Southeast Asia have been referred to as “black” by lighter-skinned populations. No population is referred to by their neighbors as those “straight hairs,” to my knowledge. But another point in the United States is that historically the black-white dichotomy has dominated our historical narrative to the exclusion of others. (with an asterisk for Native Americans) Though black Americans are an admixed population, which is around 20% European in ancestry with considerable variance (e.g., ~10% of the black American population is more than 50% European by ancestry), white Americans are relatively homogeneously European. Unlike the populations of Latin America admixture did not occur along a continuum, and due to hypodescent there was a categorical binning where black Americans with any visible African ancestry were categorized as non-white (and some with no visible African ancestry!). But the past is not the present. Today Americans of Latin American origin are a larger proportion of the population than black Americans. These groups are often admixed in ancestry, and exhibit a continuum of appearance. The mean proportions of ancestry can also vary from region to region, as evidenced by the recent paper I pointed to earlier this week. While black Americans and white Americans are nearly disjoint in physical appearance, there are Latinos of all phenotypes. Most understand that the quasi-racial status of the Hispanic/Latino category is awkward, and at some point the old paradigm will need to shift. Not only is the United States transitioning to beyond a black-white model but we also now understand the genetics of human pigmentation. The genes which are responsible for most of the variation between human populations in complexion have been identified, including their effect sizes. About half a dozen genes of large effect can explain ~90% of the between population variance. Some of the genes, such as SLC24A5, are so ancestrally informative that sans selection you can ascertain ancestry in mixed populations simply by inspecting its frequency. With that said, I recently reread an “old” paper from the ancient days before human pigmentation was elucidated with any depth, that is, 2004. It might lack a firm theoretical framework because of ignorance of the genetic architecture of skin color, but there’s some interesting data on admixed populations and phenotypes worth revisiting. Implications of correlations between skin color and genetic ancestry for biomedical research.

There are 4 populations here. Latinos from Colorado were left out of the chart because the method used to measure skin color was different and so not comparable. Note the unsurprising variation across all groups, and the mean values. African Caribbeans are darker skinned, on average, than African Americans. This is what you would expect from the social-historical context. In the United States majority black regions (e.g., the cotton country of Mississippi and Alabama, the coastal regions of South Carolina) were exceptional. In contrast in the Caribbean black slaves were the overwhelming majority in most of the British colonies. As a point of fact they were slave-societies where a small transient, and sometimes absent, white minority extracted surplus through the forced labor of Africans who had to be imported at very high rates because of mortality. The Mexican sample is from Guerrero, which is a region where mixed-race individuals are more Amerindian than European. The Puerto Ricans are from New York. Some qualitative research I’ve read suggest that the Puerto Ricans who immigrated to New York City were darker-skinned and more African in background than those who remained on the island, because the more European elites had less of an incentive to leave. So it may be that the New York Puerto Rican sample is not totally representative of Puerto Rico itself. Note that the variance for the Latino samples is smaller than from the predominantly African ones. Why might this be? First, the difference in skin color between Africans and Europeans is greater than between Europeans and Amerindians. The potential range is therefore greater in a European X African scenario than a European X Amerindian one. Additionally, the variance will be lower as you change the proportions so that they are less balanced. Consider SLC24A5. A population which is 50% European and 50% African in ancestry will have a heterozygosity of ~0.5. A population which is 75% European and 25% African in ancestry will have a heterozygosity of ~0.38. One which is 90% European and 10% African will have a heterozygosity of ~0.18.* Note that the average melanin index for white Americans is ~30, while it is ~60 for West Africans. In any case, what’s the admixture of these groups? 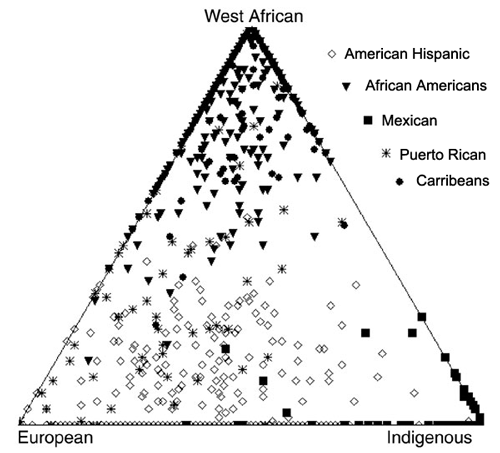 You can look at the paper to see the average admixture for the populations as a whole. Looking at this chart seems to overstate the proportion of indigenous ancestry in the African groups, and African ancestry in the Mexican one, probably because we don’t discern very easily the enormous numbers concentrated on the edges of the diagram. On the other hand, the Puerto Rican sample is clearly trihybrid, We know this from other research. As one would expect there also seems to be somewhat more African than Amerindian ancestry among the Puerto Ricans. Unlike the Amerindians, there was constant gene flow from Africa (and Europe) for generations. The European proportion is also preponderant among Puerto Ricans, which matches what you might expect based on their skin color (a substantial minority of Puerto Ricans have the mean complexions of white Americans). Now we look at how skin color genes relate to admixture in the individuals. 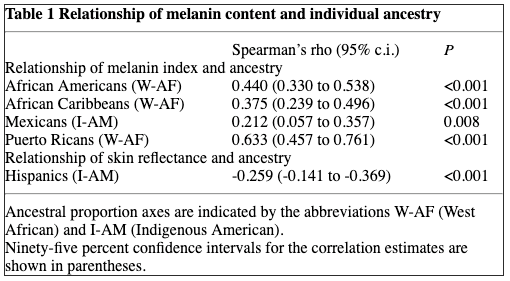 Ancestral proportion axes are indicated by the abbreviations W-AF (West African) and I-AM (Indigenous American).Ninety-five percent confidence intervals for the correlation estimates are shown in parentheses.

As you can see the correlation is relatively weak between ancestry and complexion in the Mexican and Mexican American sample. It is stronger among Puerto Ricans. And modest among the African groups. In hindsight we know that there are a few genes of large effect segregating within the population, so sample variance will result in a relatively large range even within families, who presumably tend to share approximately the same proportion of ancestries. I will now quote from the paper:

It is important to consider the implications of the wide variation in the strength of the correlation between constitutive pigmentation and individual ancestry in these admixed samples. This variability is presumably a reflection of differences in the degree of population structure present in each population or of the levels of pigmentation differences between the parental populations and the number of genes involved. For example, the strong correlation observed in Puerto Ricans seems to indicate that continuous gene flow, assortative mating or both factors are important in this population. On the contrary, the correlation between melanin content and ancestry in Hispanics, though significant, is weak. This is consistent with historical data indicating that this population appeared as a result of a relatively old admixture event and that independent assortment has greatly decreased the association between unlinked markers created by the admixture process…Alternatively, the differences in the extent of the correlation between constitutive pigmentation and ancestry may be due in part to admixture histories involving populations with widely different pigmentation levels. The Puerto Rican individuals have substantial contributions from three parental groups (Europeans, West Africans and Indigenous Americans). The African American and African Caribbean individuals have contributions mainly from West Africans and Europeans, and the Mexican and Hispanic individuals have primarily European and Indigenous American ancestry.

Remember the Uyghurs? They are an admixed population of East and West Eurasian origins, but as there has been little new gene flow and there has been around 2,000 years of random mating, within population variance in ancestral quanta is relatively small. Nevertheless there are Uyghurs who look mostly European, and Uyghurs who look mostly East Asian, with most a mix. The reason is that only a small subset of genes control the variation which we use to classify people as members of a particular population. It looks like something similar happened among the Mexican Mestizo populations. Now to Puerto Rico. On the one hand the caste structure might have been stronger, resulting in assortative mating among phenotypes. But I think gene flow is a more likely answer. Puerto Rico is a small island, and has been subject to a lot of immigration from Spain in the 20th century. Correlation between skin color and European ancestry probably has to do with a great deal of recent admixture. The point is that though there is a correlation between skin color and ancestry, that correlation is imperfect, and its informativeness is sensitive to various population genetic parameters. On an operational level this does not mean that people need to know what the allele frequencies of SLC24A5 in the HGDP data set are. Rather, Americans probably need to start being more cautious about using the phenotypic shorthands that they use to signify race. I’ll conclude with a quote from Eugene Volokh’s How the Asians Became White:

Asians are now white. Don’t believe me? A recent MSNBC news headline announced a “Plunge in Minority University Enrollment” at the University of California, with UC Berkeley reporting that “minority admissions had declined 61 percent.” Actually, the total percentage of racial minority students at Berkeley, Asians included, fell from 57% to 49%. If you exclude the burgeoning group of people who decline to state their race, the minority percentage fell only three percentage points, from 61% to 58%. The drop was exclusively among blacks, Hispanics, and American Indians. Asians, who make up less than 10% of the California population, apparently aren’t a “minority.” Or listen to former California Chief Justice Rose Bird. Last year, she wrote a commentary saying that, without race preferences, the UC system would be “nothing more than a group of elitist, `lily white´ institutions.” A coorganizer of Jesse Jackson’s recent march in favor of race preferences called UC Berkeley’s law school, whose entering class last year was 20% minority, including 14% Asian, “lily-white.” Asians aren’t just white: They are lily-white. I first noticed this effect 10 years ago, at a party where a friend of mine commented that the guests were all white. I responded by mentioning about a dozen Asians; oh, she said, that’s right, but you know what I mean. At a recent UCLA conference I attended, two speakers complained that everyone on the panel was white, without even realizing that one of the speakers was ethnically Chinese,and another was an Asian Indian with skin darker than that of many American blacks.

* Frequencies are disjoint, so do the HWE based on ancestry.