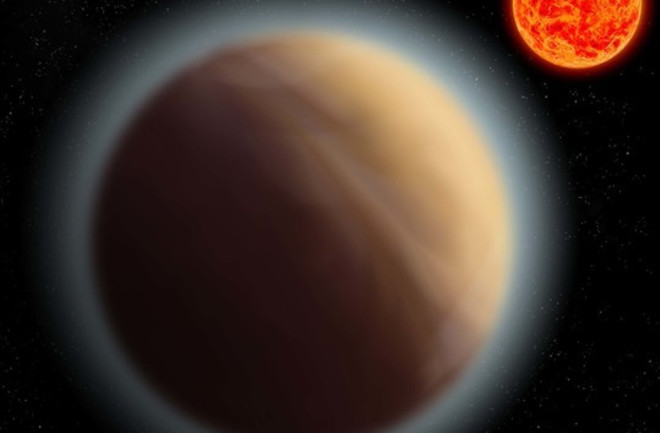 An artist's depiction of GJ 1132b (Credit: MPIA) On the list of exoplanets that could hold life, GJ 1132b wouldn’t come near making the cut. It’s a super-Earth whose upper atmosphere reaches 500 degrees Fahrenheit (260 degrees Celsius), meaning it only gets hotter as you move down. It’s barely a hair away from its star, completing a year in 1.6 Earth days. Life is incredibly unlikely to survive there. Yet it may be one of the most important planets to come along in the search for life. So why’s that? Well, it’s because it has an atmosphere. GJ 1132b orbits an M-dwarf star. M-dwarfs are the most numerous stars known in the universe, but also some of the most turbulent. While they can last trillions of years, the first few billion years of their lives are spent expelling violent flare events. Most of these M-dwarfs likely have planets, and a handful of known planets around these stars are in the habitable zone. These early flare events may sweep away those atmospheres, leaving what could have held liquid pools of water and an Earth-like atmosphere instead barren rocks. And yet GJ 1132b has an atmosphere, according to research from the European Southern Observatory and the Max Planck Institute. The atmosphere appears to have abundant water vapor and methane with a similar thickness to that of Venus. The research, published in The Astronomical Journal, suggests that planets around M-dwarf stars can retain atmospheres even after their turbulent early years. GJ 1132b, which is about 39 light years away, is considered an older planet. Thus, other M-dwarf planets might be able to retain their atmospheres, and planets in the habitable zone could have a way to actually host life rather than showing false promise. Instruments like the James Webb Space Telescope may be able to glance at other M-dwarf planets to see if atmospheric retention is common or if 1132b is an outlier.