Astronomers have discovered a half-dozen galaxies, which formed within the first billion years of the universe, blockading a supermassive black hole. 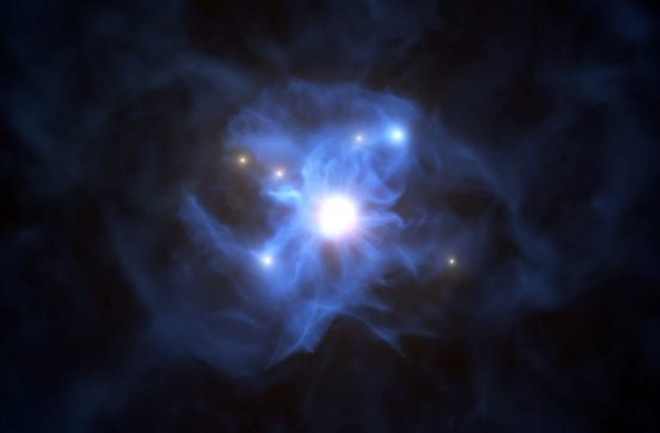 This artist’s concept shows the six galaxies, which astronomers think might just be the brightest galaxies in a larger group, were found surrounding a supermassive black hole in the early universe. This is the first time researchers have found such a tight-knit group of galaxies this soon after the Big Bang. (Credit: ESO/L. Calçada)

Astronomers have long struggled to understand how supermassive black holes could have formed in the early universe. They know these cosmic goliaths would have needed to grow extremely fast to achieve their supermassive status so quickly (within about 1 billion years of the Big Bang). But exactly where they found huge amounts of matter to gorge on remains unclear.

The six newly discovered old-school galaxies reside within a vast web of gas — which spans some 300 times the diameter of the Milky Way — and were observed thanks to extended observations by VLT. After analyzing the data, the researchers determined they were seeing these galaxies as they existed just 900 million years after the Big Bang, when the universe was little more than 6 percent its current age. This is the first time such a close grouping of galaxies has been found within the first billion years of the universe.

Plus, at the center of galactic mosh pit sits a supermassive black hole some 1 billion times the mass of the Sun. “[Supermassive black holes in the early universe] are extreme systems, and, to date, we have had no good explanation for their existence,” said lead author Marco Mignoli in an ESO press release.

Scientists know there is a limit to how fast a black hole can grow: the Eddington limit. But while that plays a part in the formation of supermassive black holes in the early universe, the real question scientists struggle with is tracking down where early black holes sourced their meals in the first place.

The key likely has to do with the universe’s vast cosmic web. This (literally) universal structure is woven through the entire cosmos, connecting distant galaxies, galaxy clusters, and galaxy superclusters through threads of faint gas know as filaments.

The authors behind the new study think that their supermassive black hole and its surrounding galaxies, dubbed SDSS J1030+0524, likely fed on the gas that was stockpiled in a tangled knot of cosmic web filaments.

“The cosmic web filaments are like spider’s web threads,” said Mignoli. “The galaxies stand and grow where the filaments cross, and streams of gas — available to fuel both the galaxies and the central supermassive black hole — can flow along the filaments.”

But that just pushes the question farther back. How did these filaments first get their gas? Astronomers think that answer might be related to another long-standing astronomical mystery: dark matter.

In the very early universe, normal matter was too hot to actually stick together and form gravitationally bound objects such as black holes and galaxies. But researchers think dark matter may have been a lot colder than normal matter. This means dark matter could have clumped together in the early universe, forming giant structures known as dark matter halos. The gravity from these dark structures would have went on to reel in normal matter, attracting huge amounts of gas that would allow the first galaxies and black holes to take root.

The galaxies uncovered in this new study are also some of the faintest ever observed, which means there could be many more lurking in the area.

“We believe we have just seen the tip of the iceberg, and that the few galaxies discovered so far around this supermassive black hole are only the brightest ones,” said co-author Barbara Balmaverde.