Signs of Ice Melting Inside the Barðarbunga Caldera in Iceland 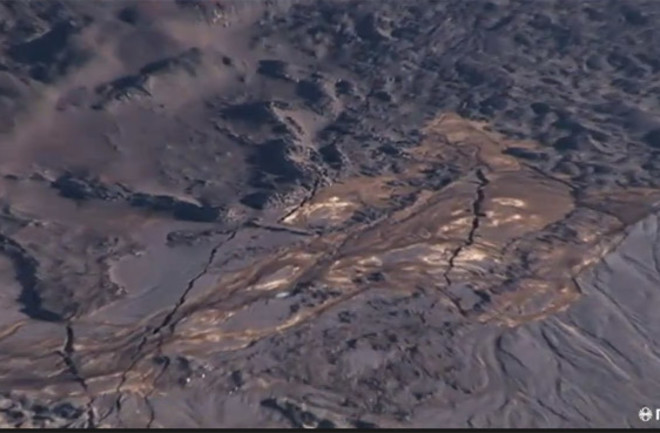 Cracks in the Holuhraun lava flow field near Barðarbunga. These may be related to the earthquake swarm currently underway in the area.

Icelandic Meteorological Office, video capture from RUV.is. The biggest development in the ongoing volcanic crisis surrounding Barðarbunga in Iceland was the discovery of a number of depressions in the ice that fills the volcano's caldera. The four "cauldrons" in the ice are relatively shallow, only 10-15 meters deep but are 1 km across and make a string that spans 4-6 km along the surface of the ice. UPDATE 2:45PM EDT: No changes were noticed in the ice cauldrons since yesterday, suggesting whatever formed them is not ongoing. Scientists from the Icelandic Meteorological Office and University of Iceland took a number of flights over the region to observe these features that have come to two main preliminary conclusions: (1) these depressions are likely caused by melting of the ice from below and (2) these depressions lie along the water divide Jökulsá á Fjöllum River, which flows beneath 400-600 meters of ice. Now, this water from melting can't just disappear, so the IMO scientists have been surveying potential places where water drains from the caldera and found that Grímsvötn Lake has risen 5-10 meters over the last week, so that seems like the destination of the 30-40 million cubic meters of meltwater. Flights over the area also revealed cracks in the Vatnajokull ice cap and cracks in the Holuhraun lava flow fields (see above; check out video here) that could be related to the intense seismicity that the area has been experiencing over the past week, although there is some debate about how new these features (see above) might be. Large earthquakes (M5+) continue to occur along the caldera rim at Barðarbunga, including one this morning.

Cracks in the land surface (?) near Holuhraun near the Barðarbunga caldera, seen on August 27, 2014.

Icelandic Coast Guard UPDATE: It appears that the Coast Guard image is not of one of the ice cauldrons but rather cracks in the land surface like the image at the top. These cracks may be older features or may have formed during the recent activity. I will look for new images of the ice cauldrons and post once they are made public. Now, the question on everyone's mind is: What is causing the melting? It doesn't have to be a subglacial eruption. In fact, just intense hydrothermal activity brought on by the intruding basalt beneath can easily melt ice that is resting at/near the land surface. So, although they have seen these cauldrons and signs of water leaving the caldera, there is little-to-no other evidence that any eruption of lava as taken place. That being said, this is all happening under half a kilometer of ice, so really we just have circumstantial evidence with which to work. The second interesting development today is the extension of the intrusion to the northeast into the Askja basaltic fissure zone, which runs for 100 km NW to SE near Askja. Now, this isn't under the main edifice of the volcano, but rather the peripheral areas where basaltic lava flows have issued in the past. With this new development, the IMO has raised the volcanic alert level at Askja to Yellow (with Barðarbunga remaining at orange). In all likelihood, this new development means that we have an increased chance of a new basaltic fissure eruption in the area between Askja and Dyngjujökull ... but just in case the intrusion continues towards the caldera, I've speculated on some potential scenarios (which are still highly unlikely). So, the waiting continues as Barðarbunga keeps on rocking and melting.