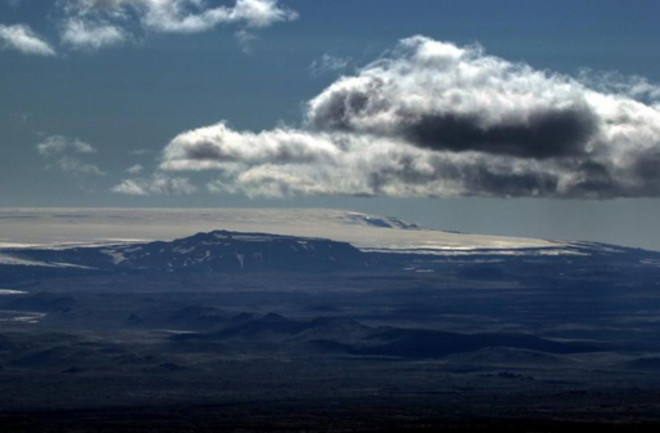 The view of Barðarbunga in Iceland from the slopes of Askja.

Dave McGarvie, used with permission It has been over 3 years since the last eruption in Iceland. However, there are signs that an eruption might be in the works near remote Barðarbunga. The Icelandic Meteorological Office (IMO) is reporting two major earthquake swarms that started up on the morning on August 16 and continue to roll into August 17. Right it seems that there are two separate earthquake swarms producing small earthquakes and has now eclipsed the May 2014 swarm in terms of number of earthquakes. There are no indications that an eruption has started at Barðarbunga, but some roads have been closed as a precaution because any eruption would likely produce a jökulhlaup (glacial outburst flood) as both swarms are occurring underneath Vatnajökull. This ice cap is also the home of the last Icelandic volcano to erupt, Grímvötn. There was some foreshadowing of that eruption before the explosive event, but many earthquake swarms in Iceland don't directly lead to an eruption. An overflight of the area performed today doesn't suggest much in the way of eruption either but the IMO has put Barðarbunga and the area around it on elevated alert. UPDATE 9 AM EDT 8/16/14: The IMO has raised the alert status at Barðarbunga to orange after the continued and now shallowing earthquakes under the volcano. This suggests that magma is rising under the volcano, which means that the chances of eruption are increasing. The IMO doesn't say an eruption will happen -- this could easily end as a shallow intrusion under Barðarbunga -- but the heightened alert (2nd highest of the Icelandic scale) does allow for more preparation. The last confirmed eruption from Barðarbunga was back in 1910 (Author's note: As Jon Frimann in the comments below correctly points out, this 1910 eruption was from Loki-Fögrufjöll, which is near Barðarbunga but not the same edifice. However, these two eruptions are likely linked to the same subvolcanic system. The last confirmed eruption from the Barðarbunga edifice was in 1794), although since then there have been numerous unconfirmed eruptions that may not have breached the surface of the ice cap under which the volcano resides. Complicating matters, the earthquake swarms are not occurring directly underneath Barðarbunga, but rather to the east. Now, this is also not unexpected in Iceland where fissure eruptions of basalt have occurred in places away from known volcanoes (such as Laki in 1783) and we don't have a great idea of exactly what lies underneath some of these massive ice caps. If the eruption is related to the Barðarbunga system, it could be interesting as the 1910 eruption was a mix of both basalt and rhyolite. Not only that, but Barðarbunga was the source of the Thjorsa lavas that erupted 25 cubic kilometers of basalt ~8,500 years ago - the largest basaltic eruption in the Holocene. There is no signs that would suggest that anything remotely close to this is in the works at Barðarbunga right now, but the volcano has quite a storied history of eruptions. Curious how to pronounce Barðarbunga? Dave McGarvie (an Open University lecturer - if you want to know about Icelandic volcanism, follow him @subglacial) suggests "b-OW-r-tha-boon-ga" as the way to go. Special thanks to Dave for some of the information in this post and the excellent shot of the volcano.