Shhhhh... Scientists Are Listening for the Universe's Smallest Possible Noise

A new "quantum microphone" can measure sound waves just a few quintillionths of a meter high—"much less than the size of a proton." 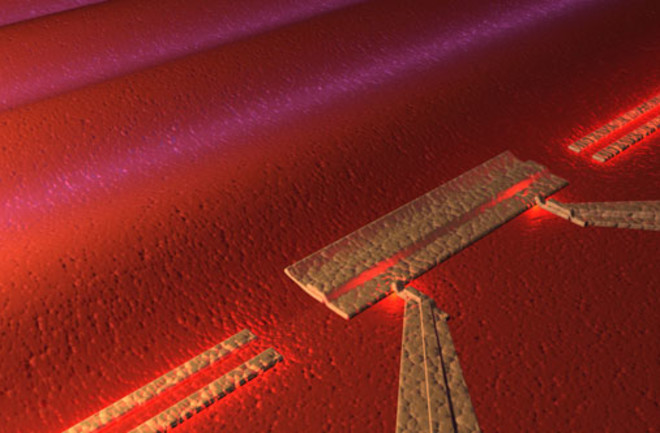 A 2-millimeter "echo chamber," fashioned on the surface of a microchip, can eavesdrop on subatomic sound waves. | Courtesy Philip Krantz/Chalmers University of Technology

On a planet coursing with sound and fury, physicists are listening for the softest possible sound in the universe. Called the quantum phonon, this subatomic acoustical wave can be detected only by intricate instruments that distinguish pure silence from its smallest possible deviation. Recently physicists led by Per Delsing of the Chalmers University of Technology in Sweden created such a mechanical ear, which could soon tune in on the phonon’s minuscule notes.

Delsing’s quantum microphone is built on a semiconductor chip two-tenths of an inch long. On the chip’s surface, which is cooled to near absolute zero (–459 degrees Fahrenheit) to eliminate thermal vibrations, two tiny aluminum cones connected by an electric field generate extremely faint sound waves that bounce back and forth. As they go, the waves slightly displace atoms in the semiconductor, shifting positive atomic nuclei off center from their surrounding electrons and subtly altering the electric charge of the atoms. A detector positioned in the path of the waves registers those changes, acting as the microphone. The smaller the signal, the smaller the wave. Although his device cannot yet pick up individual phonons, Delsing says his team is getting close: They can measure sound waves just a few quintillionths of a meter high. “That’s much less than the size of a proton,” he says proudly.

Phonons could contribute to future quantum computers. These powerful machines would rely on the qubit, a unit of information that can represent both 0 and 1 (the building blocks of binary computing), instead of the standard bit, which can be only one or the other. Scientists had assumed quantum computers would process information with light, but a small enough sound wave could work as well.

On a more basic level, no one has ever studied phonons in action, so scientists simply do not know what happens when they travel through a material. As a result, Delsing says, the potential for new discoveries is tremendous: “We can detect things that have not been possible to detect before; we’ll have to see where that takes us.”