Seeing The Invisible in The Carina Nebula 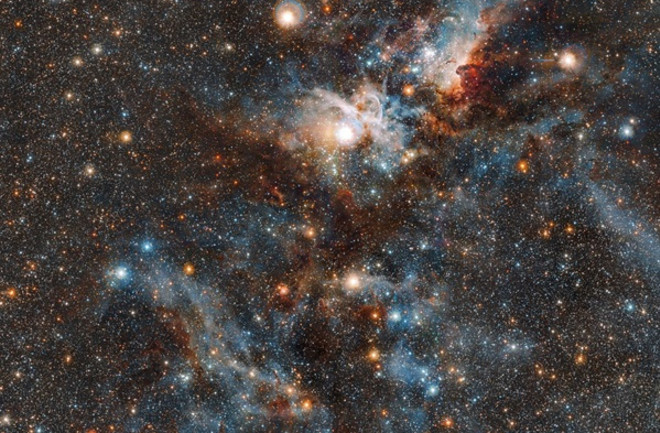 VISTA images of the Carina Nebula show an infrared view we can't see with our eyes. Eta Carinae appears as the bright ball of light just above the "v" of dark material at center; the Keyhole Nebula is to the right of Eta Carinae's glow.(Credit: ESO/J. Emerson/M. Irwin/J. Lewis) The Carina Nebula (NGC 3372) is a massive star-forming region within the Milky Way. Officially discovered by French astronomer Nicolas Louis de Lacaille in the 1750s, the nebula stretches over 300 light-years across, so big and bright that it’s easy to spot with the naked eye. With a telescope, even more detail unfolds — but all of that detail is in visible light. Part of what makes the nebula so fantastic for amateurs, however, is exactly what professional astronomers dislike the most: dust and glowing gas that blocks the view of forming stars hidden within the visually striking but dark clouds. But infrared instruments, which are capable of sensing heat, can penetrate the cooler dust and gas of the nebula to reveal what’s going on inside. Recent images from the Visible and Infrared Survey Telescope for Astronomy (VISTA), currently the largest infrared telescope in the world dedicated to astronomical surveys, are now helping astronomers get a better grasp than ever on the inner workings of the region. So far, VISTA has helped researchers identify almost 5 million individual sources of infrared light within the nebula, cataloging forming stars down to just a tenth of the Sun’s mass. Many of these sources are either newly detected or known but poorly studied clusters of young stars. Like many star-forming regions, the Carina Nebula is dynamic, undergoing changes faster than other types of astronomical objects visible in the sky. One of its best-known features is Eta Carinae, an intense binary star system that, less than two centuries ago, was one of the brightest objects in the Southern Hemisphere and the second-brightest star in the sky. Today, it remains a naked-eye target, though its brightness undergoes frequent changes as a result of the stars’ activity. The stars are also surrounded by the famous Homunculus Nebula, a double-lobed structure of material that has been ejected from the system. Another of the nebula’s famous features is the Keyhole Nebula, a dense cloud of gas that lies near Eta Carinae and contains several massive stars that have actively changed the shape of the cloud over the past several hundred years as the winds of charged particles they produce slam into the remaining material. Over time, young stars destroy the nebulae in which they are born. The energetic light and other particles they emit destroy or blow away the gas and dust surrounding them over time, leaving only the stars behind. But the early stages of star formation are still shrouded in mystery — and dust — making infrared observations that can cut through the dark, obscuring material vital to complete astronomers’ picture of how our galaxy and others birth new suns and planetary systems.