Seeing Into the Future

The next generation of visual prosthetics could enable people who've lost their sight to find a door—or even recognize a friend again. 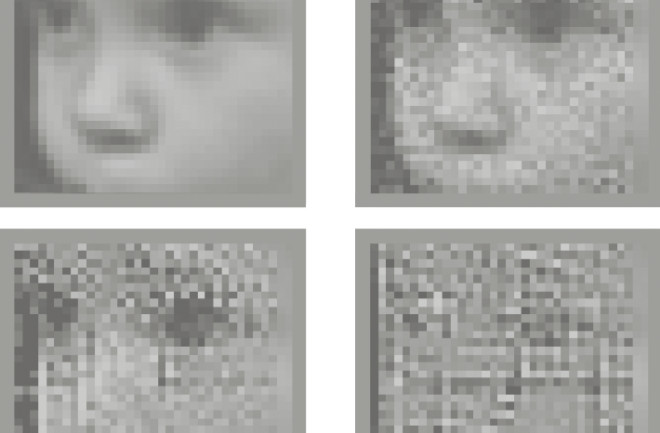 From top left: What a mouse would naturally see; two simulations of the output from Nirenberg's retinal prosthetic making use of neural code; and the view with a current retinal implant (bottom right).

Around the world, more than 20 research teams are racing to develop commercially viable bionic eyes. Each design differs slightly in the technical details, but the hurdles are the same: creating an effective device tiny enough to fi t inside the eye, powering that device, and getting signals from the detector to the brain. Most are already being tinkered with in animal models, and at least four have reached clinical trials in humans.

Many of the bionic-eye projects, including Second Sight and Retina Implant, use the same basic solution to surmounting those hurdles. A camera or a silicon detector collects light, then delivers electric signals to surviving cells in a patient’s damaged eye. The retinal cells process those signals as visual information and pass it along to the brain. Such devices are analogous to cochlear implants, which restore hearing to deaf people by stimulating inner-ear neurons—but the ear is more tractable than the eye, says Peter Walter, an ophthalmologist and a member of a German team that developed a bionic eye called EPIRET. “It is easy to contact the neurons in the cochlea. In the retina it’s much more complicated since far more neurons are involved in the process of generating a signal.”

Scientists rely primarily on two approaches to make a good connection. Devices like EPIRET sit on top of the retina in an “epiretinal” configuration, in contact with the ganglion cells. Others, such as the prosthetic made by the Boston Retinal Implant Project, nestle under the retinal layers. It’s not yet clear which approach will make the best connection. Epiretinal arrays, though surgically easier to implant, are usually affixed to the retina by a single tack and do not remain fl at against its surface, increasing the amount of electricity needed to stimulate the neurons severalfold, says Boston project cofounder Joseph Rizzo.

Power and resolution are the other two challenges and involve a trade-off. In some prosthetics, a power cable crosses the white of the eye, potentially creating a path for infection. Walter says EPIRET was the first human implant to solve this problem; its electrodes are powered wirelessly via a radio signal that is converted into a current by a tiny power coil, part of an artificial lens implanted in the front of the eye. Because that coil resides entirely inside the eye, the EPIRET array cannot be very large. Current versions can support no more than 25 electrodes, which restricts visual resolution to 25 pixels. The latest versions of the Boston Retinal Implant and Second Sight arrays are also wireless, but by placing larger receiving coils at the side or front of the eye, they can accommodate more electrodes (200 and 64, respectively).

One way around these problems is to dispense with a retinal prosthetic entirely. A Weill Cornell Medical College team led by Sheila Nirenberg employs optogenetics, a technique that allows neurons to be controlled via gene therapy. As with other prosthetics, a wearable camera digitizes images, but here it actually converts visual scenes into the brain’s native neural language. A light-sensitive protein is inserted into ganglion cells, allowing data to be communicated from camera to cells through a code of flashing lights. The technique has so far been tested only in mice, but the hope is that using the brain’s own language will create clearer, sharper images.

Nobody has yet created a bionic that can match the performance of a healthy eye. So far the best retinal implants merely allow subjects to discern large objects or make out a letter about the size of a credit card. But the relatively crude state of today’s retinal implants could change rapidly. The first cochlear implants in the 1980s could only help deaf people lip-read. Now wearers can carry on phone conversations and even listen to music. By the end of the decade, Nirenberg predicts, retinal prosthetic technology might allow patients to recognize a friend’s face—a major advance. “Once you can recognize faces, you can see pretty well, and it’s likely you can live independently,” she says.