Second Galapagos Eruption in June, This Time at Sierra Negra 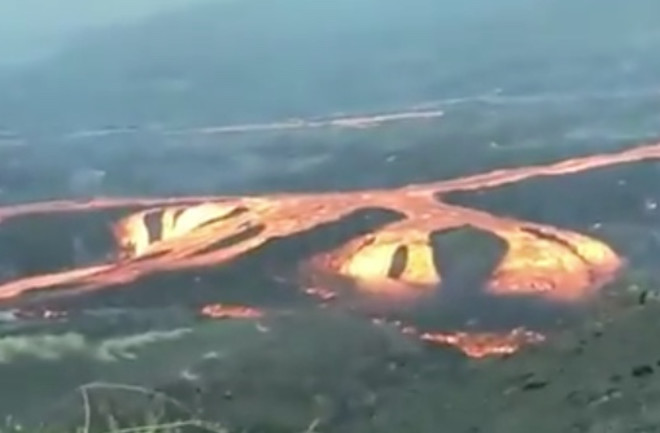 Lava flows from the June 26, 2018 eruption of Sierra Negra in Ecuador. IG Ecuador. A little less than two weeks ago, La Cumbre on Fernandina in the Galapagos erupted for the first time last September. That is no shock as the volcano has erupted 3 times since the start of the 21st century. What is surprising is that Sierra Negra on the neighboring island on Isabela erupted yesterday for the first time in 13 years. Two separate eruptions in the Galapagos in June!

The eruption at Sierra Negra

so far is what we expect from shield volcanoes formed at ocean hot spots like the Galapagos: fissures and lava flows. The lava flows have quickly reached the ocean where video shows the rivers of lava created laze plumes and volcanic lightning

! Pictures of the eruption (above) show some impression lava fountains

coming from the fissures that opened

on the flanks of the volcano. Unlike the eruption of La Cumbre

, where the island is uninhabited, people live on Isabela. So far, local officials have closed the schools and shut down tourist activity on the island, as well as evacuated ~50 people

. The eruption started after a brief earthquake swarm that started a few days ago. Now, these two volcanoes are only about 65 kilometers (40 miles) apart, so it is interesting to speculate how connected these volcanoes might be. If they are anything like the volcanoes on Hawai'i, both island chains being the products of a hot spot, then they likely aren't directly connected. Remember, in Hawai'i, Kīlauea and Mauna Loa are on top of each other, but we don't think the two volcanoes are connected near the surface. Ultimately, they have the same deep source 100 kilometers (62 miles) down, but one volcano does not appear to trigger the other. In other volcano news: