Marine biologist Tom Iliffe is on a quest to understand the halocline, a layer of water that may hold the secrets to Earth's earliest life. 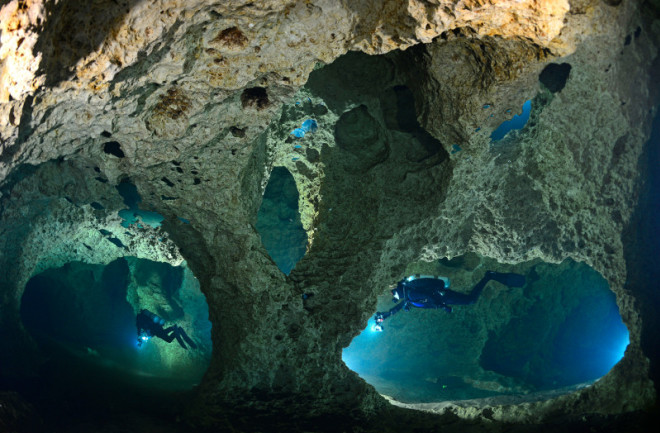 About 20 miles south of Cancun, Mexico, on a stifling summer day, Tom Iliffe squints over a limestone ledge and into a giant pool of scuzzy, brown water. Despite the heat, he’s wearing a wet suit that covers everything but his blue eyes and white goatee. A spool of bright-orange nylon line and an assortment of mesh bags carrying glass test tubes, plastic caps and measuring devices dangle at his side. Below, the water temperature is roughly the same as the air. He jumps.

“This water is about as refreshing as piss,” he exclaims with a playful smile after coming up for air.

For almost 30 years, Iliffe has made a pilgrimage more or less annually to the Yucatan Peninsula, sharing the plane ride with throngs of Jimmy Buffet-loving “Parrotheads” and spring breakers bent on partying. Although they all arrive together, their paths diverge at the airport. Iliffe is here to explore the hidden side of paradise — a vast, underworld frontier mere feet below the hordes in their flip-flops.

Iliffe, an underwater cave biologist, discovers the life scattered throughout a network of caverns beneath the peninsula’s crust. These anchialine, or coastal, caves are filled by both freshwater and saltwater. The Yucatan’s are the most extensive on Earth, yet of the hundreds of miles of documented caves here, scientists have studied only 10 percent of them. Less is known about them, and similar formations, than the ocean floor or even outer space. The creatures living in these caves are just as mysterious. Iliffe discovers new species on nearly every dive. To date, he’s identified nearly 300.

Today, Iliffe and his graduate student, David Brankovits, are collecting specimens from a cave system known as Crustacea. As its name suggests, the system houses a variety of crustaceans specific to the region’s underwater caves. Iliffe and Brankovits are entering through a cenote, or sinkhole. Flying above the peninsula reveals just how plentiful these open pits are — the lush, green landscape is pocked with circular black holes. The cenote here is about the size of a Little League baseball field, lined with ribbons of red mangrove roots drinking the water below.

As Iliffe and Brankovits prepare to swim below the limestone ledge and into Crustacea, marine biologist Fernando Alvarez and his students from the National Autonomous University of Mexico lower more gear for the divers: four large steel oxygen tanks, each weighing about 30 pounds. Alvarez is counting on the duo to retrieve tiny albino shrimp found only in these caves. Each diver needs two tanks, which they attach to their diving vests and nestle below their armpits to avoid damaging the cave ceiling.

Iliffe nods toward Alvarez. “See you in a couple of hours,” he says. Then, he and Brankovits disappear into the sludgy water...