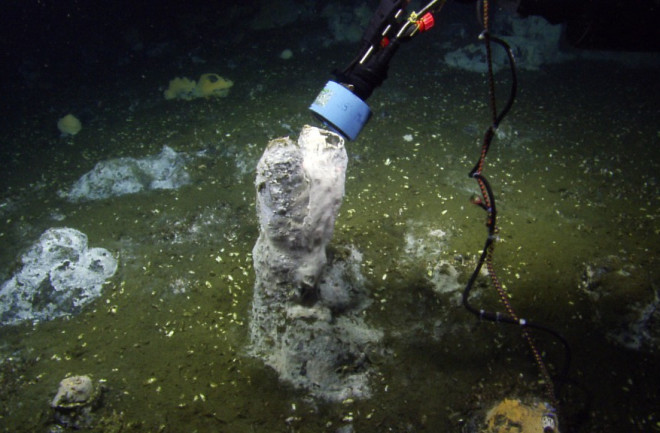 The following is one article in a series of dispatches from the E/V Nautilus. I am serving as a participating scientist on the Central California leg of the 2016 expedition; live footage of our exploration on the seafloor can be found at www.nautiluslive.org.

Malibu, California has long been known as the playground of the rich and famous, a coastal tendril of the 18 million person greater Los Angeles megalopolis. Its beaches serve up consistent sun and waves, movie stars’ mansions line the winding canyon roads, and even the trailer park is an aspirational address. And yet, just seven kilometers off the coast and 700 meters below the sea surface, a seafloor oasis had gone unseen until just last year. This vast chemosynthetic hotspot, likely fueled by methane seepage into the shallow subsurface, was discovered by the Exploration Vessel Nautilus and its remotely operated vehicle (ROV) Hercules. The Nautilus’ initial reconnaissance effort in 2015 revealed a vast series of colorful microbial mats, extending more than a kilometer along the contour of a submarine canyon. This year, Nautilus returned to the scene – known as the Point Dume seep field – to collect a more thorough set of samples and poke around for additional noteworthy features. And it didn’t take long: soon after arriving on the seafloor, Hercules’ cameras had spotted a field of bizarre oblong chimneys shrouded in white and orange microbial mats. “I’ve never seen anything like this,” marvels Peter Girguis, a Professor of Organismic and Evolutionary Biology at Harvard University and the lead scientist on this leg of Nautilus’ explorations. “We’ve seen plenty of hydrothermal vents that form these kinds of chimneys,” he says, “but I’ve never seen these carbonate spires outside of the Black Sea. The mechanics at work are really mysterious.” The chimneys themselves are likely made of carbonate rock. At most methane seeps, clumps of syntrophic microbes inhabiting anoxic zones a few centimeters beneath the seafloor oxidize methane and convert it to bicarbonate ions. These molecules can link up with calcium or magnesium ions in the seawater to precipitate solid carbonates. Typically, these precipitates seem to form centimeter-scale pebbles, which are then cemented into more extensive, laterally emplaced carbonate shelves. The constructions found earlier this week appear to be three dimensional projections of the same process. The interior of the football-sized objects is filled with dark sediment, a centimeter-scale carbonate crust keeps everything contained, and sulfide-oxidizing microbial mats provide a white or orange outer coat. A small hole at the top could be where the upflowing fluid emerges. The Malibu-adjacent seeps demonstrate the remarkable dichotomy between the heavily trafficked and the utterly unexplored – two opposite poles of our known world within several kilometers of each other. And while the Nautilus-driven discovery and exploration of the Point Dume seep field has exposed a novel part of the seafloor to a global audience, many mysteries remain. For one thing, despite the telltale signs of methane seepage – the clams, the microbial mats, the incipient carbonate rock crusts – methane has not yet been confirmed, as no geochemical tests have been conducted. Most seep habitats of this size and profusion are marked by bubble streams, yet neither sonar nor visual surveys have revealed such signals. And then, of course, there are the rock chimneys. What causes the vertical protrustions, and why are such structures not found at other seep sites? What might these distinctive forms mean for the global methane cycle and greenhouse gas emissions? Girguis believes that the next generation of analytical platforms could help provide answers. “Tools like movable autonomous observatories would be awesome,” he says. “They’d give us a chance to interrogate areas of the deep sea like this for longer periods, and maybe see some episodic gas movement. That would really help us see what’s going on.”