Scitable, Nature as king of all science media?

A few weeks ago I was pointed to Scitable, part of the Nature media empire. Here's how it's introduced:

A free science library and personal learning tool brought to you by Nature Publishing Group, the world's leading publisher of science. Scitable currently concentrates on genetics, the study of evolution, variation, and the rich complexity of living organisms. As you cultivate your understanding of modern genetics on Scitable, you will explore not only what we know about genetics and the ways it impacts our society, but also the data and evidence that supports our knowledge.

Due to the disciplinary focus I can see why Nature Education might have thought I would be curious. Since I'm rather confused by Facebook's constant barrage of applications the relative simplicity of the interface was a relief. The site has the standard "social networking" features, but these sorts of utilities are useless without content. I clicked Topics, then Population and Quantitative Genetics. This is an area where I feel that Google has problems spanning the gap between Wikipedia and academic articles...because there isn't much content in between in terms of difficulty and depth. So I was curious to see "Shifting Balance Theory" as one of the topics in Scitable. Wikipedia barely has a paragraph. In fact one of the earliest hits on Google for the query "Shifting Balance Theory" is usually a post from my coblogger David at Gene Expression Classic from 2003. And yes, it's still there at the #4 position on Google for me (your results may vary of course!). But Scitable makes it to #5 & #6, pretty good. But what's in the entry? 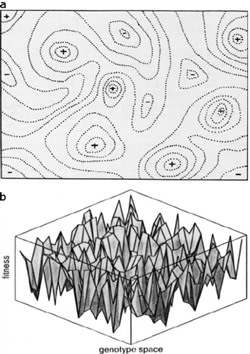 A fair amount, but definitely not an academic article. Rather it's fleshed out like some of the more well traveled regions of Wikipedia. Compare the figure to the left with what you find in Wikipedia for adaptive landscape. This fills the space between bare definition and thick esoteric scholarly exposition. When you have the word "allele" defined via a link (actually, a div-pop, someone knows how to use Javascript & CSS) it's obviously meant to be a primer that assumes very little knowledge. There are also a nice list of papers at the end you can check out to follow up if you care, though if I have to find fault it would have been nice to just have the papers linked (several have free copies on the web). The key here isn't that you can't find the content, or the network, elsewhere. You can. Nature just brings them under the same umbrella. Seems like a good start, though they'll need to keep building on the foundation. I remember being curious about what they would do with Free Association, Nature Genetics' weblog. Turns out, not much (e.g., 9 month posting gaps). Finally, I do have to note that I believe their programmer got just a little too excited about the various ways to play with the AJAX framework's flexibility. I think Google's search works because of its simplicity. They really don't have enough content to warrant all the filtering capabilities that are out there as a default part of the skin. If someone wants a really focused article they'd go to Google Scholar. Scitable is currently browsable enough so that it doesn't need to be too searchable. As long as WolframAlpha doesn't know what to do with the input they're good.