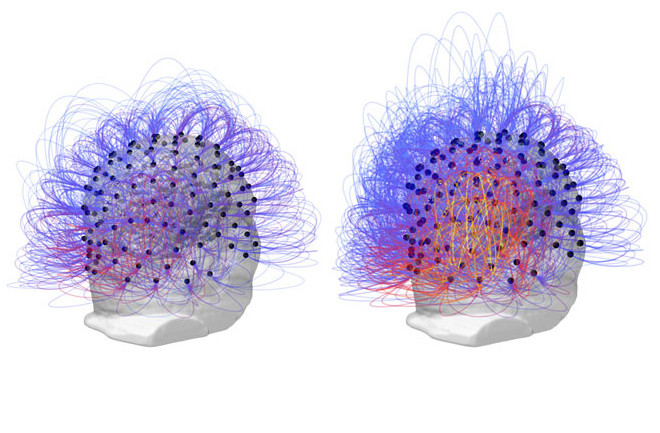 This figure shows information sharing across all electrodes before (left) and after vagus nerve stimulation. The yellow and orange colors on the right indicate an increase of connectivity among posterior parietal regions. (Credit: Corazzol et al.)

It’s generally believed that patients who are in a vegetative state more than a year after experiencing severe brain trauma won’t regain consciousness ever again. Their essential bodily functions will continue, but it’s extremely unlikely they’ll ever be aware of their surroundings.

Using an implant to stimulate the vagus nerve, doctors restored signs of consciousness in a 35-year-old Frenchman who had been in a vegetative state for the past 15 years. As scientists reported in a study published Monday inCurrent Biology, the patient could follow an object with his eyes and turn his head on command after one month of brain stimulation therapy.

The vagus nerve is the longest and most complex of the 12 cranial nerves, stretching from the brain to the abdomen. Vagus nerve fibers branch into every major organ in the body; as such, it plays a key role in crucial bodily functions like heart rate, respiration and the gut-brain connection—to name a few. In the brain, the vagus nerve connects to numerous regions of the brain that together comprise the “hot zone” for consciousness.

Given its important role in the body, scientists have experimented with vagus nerve stimulation as a means to treat depression, epilepsy, migraines and Alzheimer’s disease.

In this case, scientists led by Angela Sirigu of the National Center for Scientific Research in France implanted a stimulation device in the chest of their patient and monitored his brain activity over a six-month period. After a month, they noted consistent improvements in “general arousal, sustained attention, body motility and visual pursuit.” Recordings of brain activity also showed the man produced brainwaves called a theta signal, which is a sign of limited consciousness that’s not present in vegetative state patients.

Those stronger theta signals were also occurring in the parietal lobe of the brain, which is the region that integrates sensory information to provide a basis for perception. Scientists claim that after years of being in a vegetative state, their intervention restored a minimal state of consciousness in this man.

No, it wasn’t a full recovery, but the researchers say their work represents a step in the right direction, and shows that there’s hope for limited recovery in even the most severe brain trauma cases.