Scientists Just Cleared Up A Mystery About Auroras 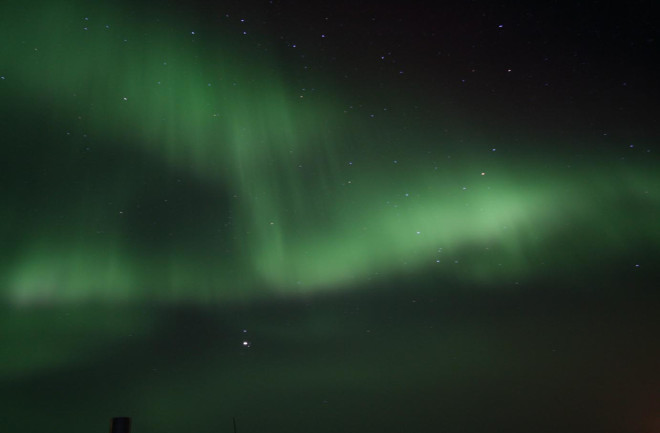 Auroras: They’re colorful, mesmerizing and, most of all, mysterious. Scientists understand the basic physics behind how charged particles interact with our atmosphere to produce these dancing lights. But the larger mechanics of when, why and how auroras appear still aren’t very well understood.

One particular mystery is that the northern and southern lights don’t always match up like researchers would expect. For years, scientists assumed that aurora borealis and aurora australis would mirror each other. That is, people in the Arctic and Antarctic Circles would see a similar show if their positions were just right. But recent research has shown that’s not the case. And now a team led by scientists from the University of Bergen in Norway thinks they have an answer.

Read more: Everything worth knowing about auroras

Life in the Bubble

If you simply imagine our planet’s vast magnetic field like the classic bar magnet moving around iron filings, you’d expect Earth to have a series of symmetrical magnetic lines looping out from the surface and returning in the opposite hemisphere.

But this mental simulation leaves out one thing — the solar wind.

We don’t often see it, but we’re living inside a bubble. The ocean of molten metal in Earth’s core makes our planet into a giant magnet, which powers a sea of magnetic energy extending invisibly far out into space. That’s a good thing, too. Our sun ejects a constant stream of charged particles that sweep past our planet. If we could see the magnetic fields, Earth would look like a tiny island in a torrent of magnetic energy. Our magnetic field pushes against the solar wind and channels it past the planet. That stops dangerous cosmic radiation from reaching the surface, and acts as a buffer against surges of electromagnetic energy from solar storms.

But this protective shield bends and deforms under the pressure of the solar wind, squashing it inwards on the planet’s dayside and stretching the magnetic field out into a long tail on the nightside. It’s constantly in motion, too: The magnetic energy of the solar wind is constantly ripping apart lines from our planet’s field and bending them back over the poles into the tail, where they reconnect with each other. In between is a pocket of charged particles that will occasionally squeeze off a blob of plasma. These plasma blobs will sometimes trail away behind us, but they can also get sucked back towards Earth, where they often find the chink in Earth’s magnetic armor.

This Achilles Heel of sorts sit right at the poles, where the looping field lines part, and plasma can sneak through into the atmosphere. When these high-speed, energetic particles slam into the molecules floating around above the planet, they often excite them enough to release a dazzling shower of iridescent, sinuous light. We call them auroras, and they usually appear near both the North and South poles.

Understanding the invisible magnetic dance that leads auroras to appear is difficult, though. Scientists didn’t even know about many aspects of Earth’s magnetic field until rocket tests gave them access to the upper atmosphere in the mid-20th century. And it’s still difficult to watch and model the cosmic wrestling match that twists, tears and reforms our magnetic field high above us.

And here’s where we get back to the mystery of the differences between the northern and southern lights. It comes down to the fact that the solar wind isn’t always hitting Earth straight on, the Norwegian researchers say in a paper published in January in the Journal of Geophysical Research: Space Physics. Due to the rotation of the sun and the Earth, that stream of particles will sometimes come in at an angle, and it twists the Earth’s magnetic field lines as they tear apart at the front and recombine at the back. When this happens, we end up with a tilted magnetic field. Because it’s tilted, the magnetic field will push the location of auroras off-center from each other and warp their shapes. Over time, they’ll eventually drift back to where they should be as the field realigns itself.

Read more: What does a magnetic field do to the human body?

For physicists, it’s a step forward in explaining a phenomenon that’s puzzled them for a long time. But it’s good news for the rest of us, too. Sometimes, a strong solar storm — an unusually intense burst of solar wind — will deform and perhaps even penetrate our magnetic field enough to damage telecommunications equipment in orbit and down on the surface. The Carrington Event in 1859, one of the most powerful solar storms on record, packed enough electromagnetic energy to send sparks jumping from telegraph machines. Today, such an event would decimate power grids across the planet.

Part of the motivation behind research into Earth’s magnetic field is to better understand how it might behave in event of an abnormally powerful flare. Will it bend, will it break? How might the energy be distributed? With their latest effort, the Norwegian researchers have taken us one step closer to knowing for sure.