Scientists Gear Up to Look For Fossils on Mars

Upcoming missions like NASA’s Mars 2020 might already have the technology to find tiny micro-fossils on the Red Planet. 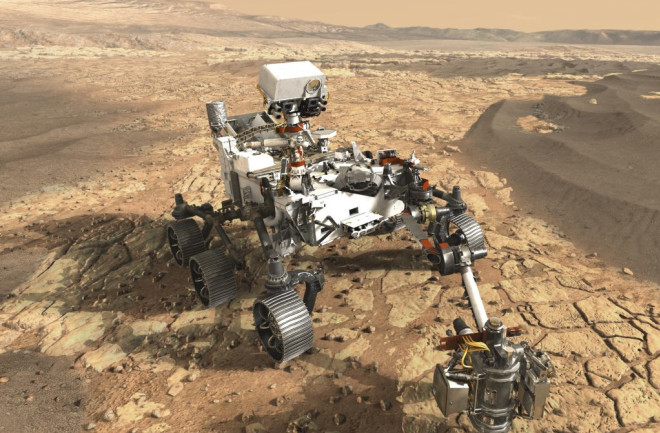 When most people imagine hunting for fossils, they probably think of finding dinosaur bones laid down in layers of rock. But the vast majority of life – and therefore fossils – across Earth’s history has been microorganisms. These tiny lifeforms, either plants, animals or fungi, can be smaller than the width of a human hair. But with the right tools, the fossilized records of these tiny creatures reveal insights into the history of a planet. Even planets that aren’t Earth.

A group of Swedish scientists led by Magnus Ivarsson point out in research published May 1 in Frontiers in Earth Science that instruments already planned for upcoming space missions like the Mars 2020 rover could detect tiny fossils on Mars, if they exist. But Mars 2020 can’t analyze every rock it encounters in detail, so the researchers propose a few ways to determine the best places to look on the Red Planet.

The researchers point out that most fossils studied on Earth are found in sedimentary rock, which is laid down in layers that slowly hardens into true rock. But most of Mars is made up of volcanic rock, more like the material that lines the bottom of Earth’s ocean floors. This kind of rock does contain fossils on Earth, though they’re harder to find.

Volcanic rocks have lots of cracks and crevices, and micro-organisms are adept at working their way into those cracks, or making more pathways of their own. When they die, they remain inside the rock where they can be preserved for millions of years.

It stands to reason, the researchers point out, that these are the kinds of fossils we should expect to find on Mars, where volcanic rocks dominate.

Of course, there’s no proof that there was ever life on Mars. But the planet might have been a much wetter, more hospitable environment a few billion years ago. There’s even evidence that Mars might have experienced significant flooding just one billion years ago. And organic materials, molecules life as we know it needs in order to function, have been found on the Red Planet as well. So, Mars may have had an environment friendly to life in the past. But even Earth only developed multicellular lifeforms in the past half billion years or so — if life ever existed on Mars, it was likely exceedingly tiny, and buried inside rocky crevices.

But even on Earth, research hasn’t focused on these fossils. That’s partly because dinosaurs make for much flashier museum exhibits and research topics. But it’s also because on Earth, these volcanic fossils are much harder to find, buried deep under the ocean. As deep sea drilling has begun bringing this hidden world to light Ivarsson and his colleagues want to develop a “microfossil atlas.” Such a repository would use Earth fossils to pin down the chemical signatures of microorganisms and separate real fossils from inorganic lookalikes.

Absent Earth’s state-of-the-art labs, the researchers needed to know if future Mars rovers are up to the task of fossil-hunting. Ivarsson’s team determined that Mars 2020 will have the capability to resolve larger micro-fossil signatures, and that rocks containing the fossils may be accessible enough for the rover to investigate. This would mean simply taking pictures of the rocks up close, for human researchers on Earth to study.

Or the rover could scan the rocks for particular isotopes – versions of normal materials like oxygen and carbon that are more common in living things than in sterile rock. Or it could look for chemical signatures left behind by long-dead microbes – many microbes make chemical changes to the rocks they inhabit, which may linger long after the creatures themselves die away.

In the long-term, Mars researchers from all backgrounds are hungry for a sample return mission. A rover could collect likely rocks and bring them back to Earth for more detailed study.

But the first step is to gain a better understanding of fossils here on Earth that may mimic what scientists expect on Mars. If humans want to search for life on Mars, past or present, it seems like a good idea to understand more about Earth’s own past inhabitants – even the tiniest ones.