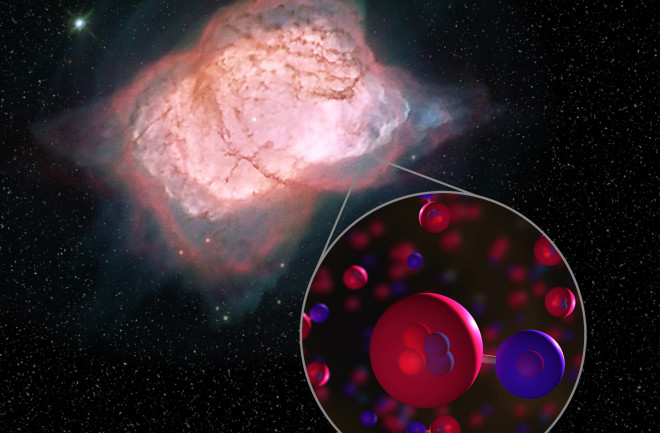 An artist's depiction of a helium hydride ion within a planetary nebula. (Credit: NASA/ESA/Hubble, Processing BY Judy Schmidt)

You never forget your first, they say, but it appeared for a long time as if the universe had forgotten its first molecule.

Known as a helium hydride ion (HeH+), this conglomeration of Big Bang leftovers is just a helium atom and a hydrogen nucleus, aka a proton. Scientists had expected to find it throughout the cosmos, but for decades they couldn’t spot it anywhere. (Researchers managed to create some in 1925, so they knew at least it could exist.)

Finally, in Nature this April, an international team of astronomers described how they used the flying observatory SOFIA to detect HeH+ molecules within a gas cloud known as planetary nebula NGC 7027, about 2,900 light-years from Earth.

“The chemistry of the universe began with this ion,” the study’s authors wrote. “The unambiguous detection reported here brings a decades-long search to a happy ending at last.”