Scientists Crack the Mystery of an Exploding Egg 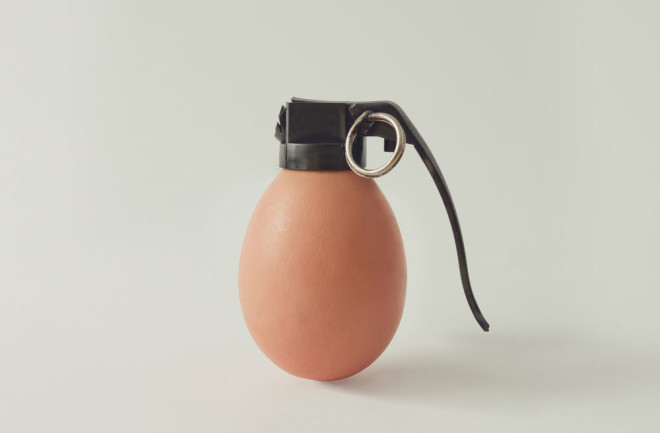 Scientists had an explosive mystery on their hands. A man suing a restaurant claimed an egg he bit into detonated loudly enough to damage his hearing. Was this a legit complaint, or an attempt to capitalize in a litigation-happy culture?

Well, after a scientific investigation, the man’s story is legit. Although microwave ovens have become a staple appliance in many kitchens, they come with oft-unheeded warnings that certain foods pose risks to people when reheated. Potatoes and eggs are among the most common culprits of potentially dangerous microwaving mishaps.

The research team’s investigation revealed that tiny pockets of water can super-heat inside microwaved eggs, bursting with potentially dire consequences.

When potatoes get heated in microwaves, pressure from steam can build up under potato skins. This can lead potatoes to rupture in sudden, unpredictable ways, said researchers at acoustical consulting firm Charles M. Salter Associates in San Francisco.

The attorney of the insurers of the restaurant that got sued hired the acoustical consultants as expert witnesses to find out more about how eggs behave when microwaved. The man who sued the restaurant claimed he suffered severe burns and hearing damage after a microwaved hard-boiled egg exploded in his mouth. (Many other details of the event, such as the restaurant, city, date and time, remain confidential.)

Since there was little scientific research into whether exploding eggs were loud enough to generate hearing damage, the scientists initially took the unorthodox approach of reviewing YouTube videos where people casually detonated eggs in microwaves. However, because these videos seemed to be more for personal entertainment than for scientific exploration, they did not account for a number of important factors, such as sound levels, internal temperatures, or the various kinds and sizes of eggs.

In experiments, the scientists reheated nearly 100 hard-boiled eggs in carefully controlled conditions. First, the eggs were placed in a water bath and microwaved for three minutes, and the temperature of the water bath was measured both at the middle and end of the heating cycle. The eggs were then removed from the water bath, placed on the floor and pierced with a fast-acting meat thermometer to induce an explosion.

About a third of the reheated eggs exploded outside the oven. For those eggs that did explode, their peak sound pressure levels ranged from 86 to 133 decibels at a distance of 12 inches.

“I would guess that the sound pressure level at the ear of an individual would be 10 decibels higher. A single event such as this would not cause hearing damage, in my opinion,” said acoustical consultant Tony Nash at Charles M. Salter Associates. He noted the U.S. Defense Department had data as to what levels of sound pressure “can lead to hearing damage risk.”

The scientists found the yolks were consistently hotter than the surrounding water baths. This likely means that yolks absorb more microwave radiation than pure water.

The researchers suggested that microwaved egg yolks can develop many small pockets of superheated water much hotter than water’s normal boiling temperature. When this unstable water gets disturbed — say, when the egg is bitten into — it can boil very rapidly. “The release of steam can be explosive,” Nash said. Nash and his colleague Lauren von Blohn detailed their findings Dec. 6 at the annual meeting of the Acoustical Society of America in New Orleans, Louisiana.

The case was ultimately settled out of court. The researchers suggested their restaurant acoustics experiments should underscore the fact that “heating certain foods in a microwave oven can be dangerous,” Nash said.