Scientists Catch a Quantum Jump as It Happens 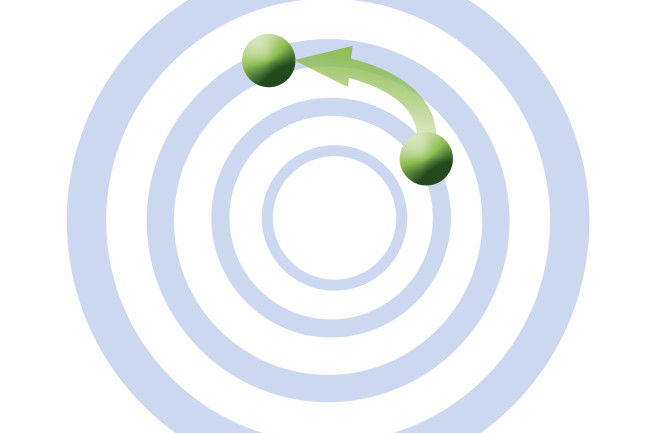 Quantum weirdness struck again in 2019. An experiment described in Nature in June settled a passionate debate that’s divided physicists for over a century, while also raising new questions. Researchers announced they’d tracked a quantum leap in unprecedented detail, showing that it’s possible not only to predict when a particle might jump, but also — bizarrely — reverse it mid-hop.

“There’s more to the story of quantum physics than we thought,” says physicist Zlatko Minev, a research scientist at IBM who led the experiment while at Yale University.

The notion of a quantum jump originated in 1913, when Danish physicist Niels Bohr introduced the revolutionary idea that electrons only circle the nucleus of atoms in discrete orbits, or energy levels. Electrons jump from one level to another, Bohr hypothesized, by absorbing or emitting a packet of energy, called a quantum. The particles can exist on one level or another, but never in between. According to this idea, quantum leaps are instantaneous and random.

Other physicists have railed against the idea that a particle jumps so abruptly. “How does an [electron] transition without ever having been in the middle?” asks Minev. To probe the mid-jump mysteries, Minev and his collaborators used an “artificial atom,” an experimental setup that can effectively mimic electron behaviors, including a quantum jump.

Quantum states change when measured directly, so to avoid that pitfall Minev and his team instead observed a proxy: the level of photons reflected or absorbed as the system changed states and energy levels. They collected and analyzed data on the scale of microseconds, which allowed them to look for behaviors not visible at longer time intervals. Yale physicist and co-senior author Michel Devoret compares it to watching a movie in slow motion. “Like in cinema, you can see things you cannot see at fast speed.”

At such fine scales, the quantum jump appeared less like an abrupt jerk and more like a smooth, continuous transition from one energy state to another. The researchers also noted that the system sent out a subtle signal before a leap, and that with a carefully calibrated pulse of light, they could reverse jumps already in progress. Manipulating quantum states in this way, says Minev, may be useful in error-correction for quantum computers.

The experiment confirms that during a quantum jump, the particle really does exist in two states at once. “In a typical quantum fashion, Bohr was right and wrong at the same time,” says Minev.