Enceladus data point to a liquid ocean under the icy crust and hydrothermal vents at the south pole. 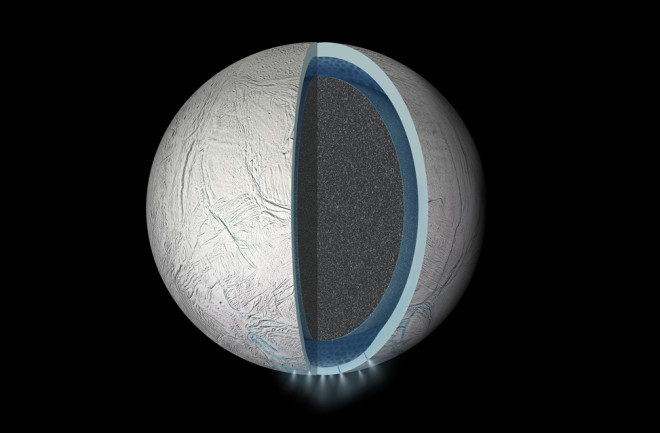 Enceladus not only has a thin global ocean of water, as shown in this NASA illustration (layer thickness is not to scale), but some of the water is likely heated via hydrothermal vents. | NASA/JPL-Caltech

Saturn’s moon Enceladus made waves in 2015 with two dramatic liquid-water-related discoveries, establishing the world as a target of great interest in the search for life.

After astronomers analyzed seven years’ worth of Enceladus data from NASA’s Cassini probe, they detected a slight rocking motion in the moon’s rotation, suggesting an outer shell of ice.

“That could only be the case if the ice shell was not frozen to the core but separated by a layer of liquid,” says team member Carolyn Porco. The team believes a shallow global ocean, perhaps only a mile deep, lies between Enceladus’ rocky core and its 30-mile-thick icy crust. At the south polar region, where about 100 saltwater geysers erupt from the surface, the ocean is likely deeper and the crust thinner.

This news came on the heels of an earlier discovery, when a team of planetary scientists announced the likely presence of hydrothermal vents on the Saturnian satellite. They studied nanometer-size silicate particles in one of Saturn’s rings that had originated deep in Enceladus’ south pole. The analysis suggested the size and composition of the particles meant they must have been dissolved from wet rocks at least 90 degrees Celsius, suggesting hydrothermal activity — warm water.

Enceladus was already a prime spot to look for life, and these new detections only make it a more enticing destination.

[This article originally appeared in print as "Saturn's Watery Moon."]