Saturn’s Small Moons Formed From The Dust of Its Rings 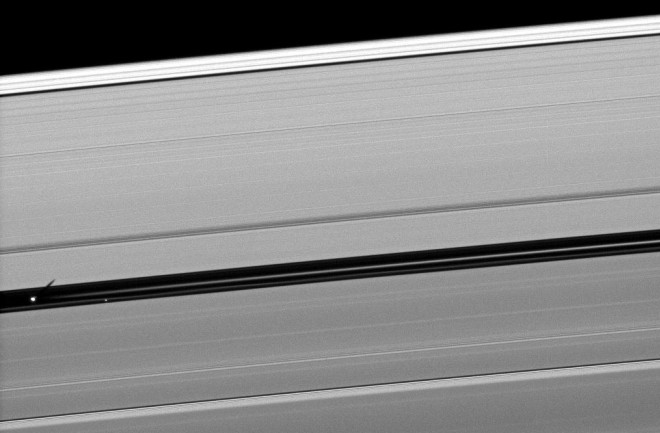 Pan, one of the moons seen during Cassini’s close flybys, orbits in the Encke gap of Saturn’s rings. (Credit: NASA/JPL/Space Science Institute) NASA's Cassini mission to Saturn may have ended in 2017, but researchers are still analyzing the vast amount of data it sent back over its final spectacular months. Astronomers most recent findings, published Thursday, center on five of Saturn’s small ring moons: Pan, Daphnis, Atlas, Pandora and Epimetheus. During six close flybys near the end of its mission, Cassini uncovered new insights into how the moons formed, and what gives them their different colors. And astronomers say they now have strong evidence that these tiny moons formed from the dust of Saturn's rings. That's interesting because the rings themselves likely formed from shredded moons.

One of Saturn's small moons, Pan, is shaped like a walnut and stretches just 21 miles (35 kilometers) across. (Credit: NASA, Matúš Motlo)

Saturn has more than 60 moons, including giants like Titan and Enceladus, whole worlds with complex geologies and atmospheres. But embedded in its rings are smaller, rocky bodies that are just as mysterious in their own ways. One of the persistent questions is whether the rings themselves are the shattered remnants of past moons. Or, perhaps instead, these small moons could be built up from the material in the rings. Cassini's new evidence hints that the ring moons it studied have low densities, meaning they likely formed from gently colliding ring material, which is now loosely stuck together. Since coming together, the moons have suffered complex histories. Small as they are, these ring moons show grooves and cracks from tidal stresses. They're caught between Saturn’s massive tug and the smaller but more complicated gravitational pull from many larger moons. All this pulling means they're being heated and pulled apart by the forces surrounding them.

Saturn and its complicated ring system are labeled here, along with some of its moons. (Credit: NASA/JPL)

Cassini also observed the moons’ colors. Some of them are reddish, while others are tinged more blue. The moons location in orbit seems to determine their color. Moons circling in the main ring pick up a red color from material there. For other moons, Saturn’s fuzzy and diffuse E-ring contributes water ice or vapor, giving them a bluish tint. Pan, orbiting in the Encke gap between Saturn’s rings, is the reddest in color. Epimetheus, on the outer edge of the main ring and closer to the E-ring, is the bluest of the moons studied. A wide team of researchers, led by Bonnie Buratti of NASA’s Jet Propulsion Laboratory, published their findings March 28 in the journal Science.