Saturn's Ring Rain is a Downpour, Not a Drizzle 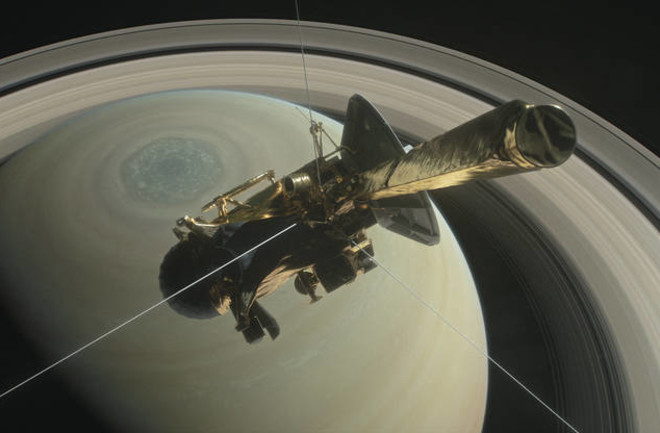 In six new papers, researchers reveal incredible facts about Saturn using data from Cassini's final transmissions to Earth. (Credit: NASA/JPL-Caltech) Before it plunged into the atmosphere of Saturn on its final death dive, the Cassini spacecraft made 22 orbits of the planet that followed a path no probe had taken before: It flew between the massive planet and its rings. During those final orbits, Cassini’s Ion and Neutral Mass Spectrometer (INMS) spotted water ice and complex organic molecules flowing from the rings to the atmosphere of the planet: ring rain. But it turns out, “ring rain is more like a ring downpour,” according to Hunter Waite of Southwest Research Institute (SwRI), lead author of a paper on the new Cassini results published October 4 in Science. The rain itself wasn’t a surprise. “Based on previous work, scientists expected water was raining from the rings into Saturn's atmosphere,” said study co-author Kelly Miller, also of SwRI. She added that the spacecraft was even oriented in a way to intentionally use its radio antenna “as an umbrella to protect it from debris.” What was a surprise, though, was the amount of rain — it was “way faster than anyone thought,” said Waite. The data clock the downpour at a rate of 22,000 pounds (10,000 kilograms) of material falling onto the planet from its rings per second. That's a lot of rain.

According to INMS measurements, the rain includes molecular hydrogen, water, and even butane and propane, which are considered “complex organics” by astronomers because of the amount of carbon atoms they contain. While hydrogen is a major component of Saturn’s atmosphere and the researchers expected to see it (and water) raining down from the rings to the planet, the complex organic molecules falling alongside them were less expected. INMS also measured variations in “rainfall” between one orbit and the next. This could mean that certain areas of the D ring, the planet’s innermost ring, are either physically different and generate varying amounts of rain, or that the overall rainfall simply changes rates over time. The team worked carefully for months to confirm their results before releasing the study. Due to the high speed of the spacecraft as it swooped between planet and rings, INMS could sense the particles because they hit the detector and shattered. But that high speed not only made the results trickier to interpret, it also means that some of the compounds detected in the rain are only fragments, and the picture Cassini gathered might be incomplete. Regardless, “It was worth it,” Waite said. He explained that such a huge amount of material flowing from the D ring to the planet likely plays a role in the chemistry of Saturn’s atmosphere. Furthermore, the outflow of material means that the D right might be regularly replenished in the same way by the next ring out, the C ring. Saturn’s ring system is unique in our solar system, and it’s likely not done surprising us yet. Even a year after its final transmission, Cassini’s data still holds a wealth of information just waiting to be uncovered, and planetary scientists remain hard at work, looking for what new discovery might appear next.