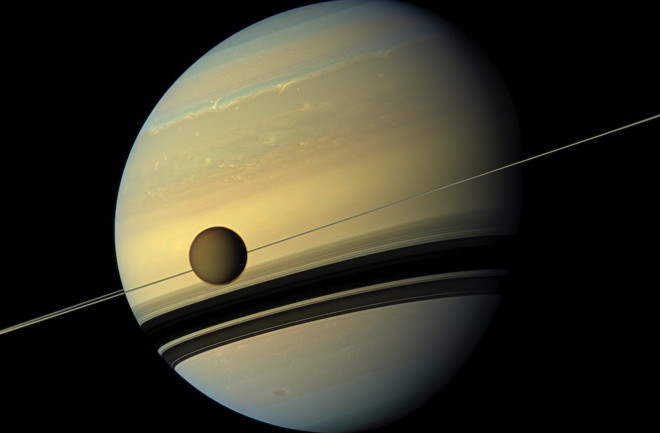 Astronomers found an entirely unexpected feature on Titan, Saturn’s largest moon, this year: a ribbon of exposed bedrock ice that wraps nearly halfway around the satellite. This unique feature came into view thanks to a recently developed analysis technique never before used on Titan.

Researchers had previously spotted surprisingly diverse landscapes on the moon, from broad plains to sandy dunes. Titan even has rivers and lakes. Since the world is so cold, these features are made up of liquid methane and other organic compounds that slosh over a bedrock of solid, rock-hard ice. But it’s tough to get good observations of the surface, because the moon’s atmosphere is so dense and hazy.

So instead of examining individual pixels from images and scouring them for details and data, the researchers used a technique called principal components analysis (PCA). This lets them look at all the pixels in a given area, helping to spot larger trends in the landscape while bypassing the atmosphere’s obscuring effects.

In April, researchers announced the discovery of an unexpected slash (below, in blue) stretching across the moon’s surface for thousands of miles. (Credit: NASA/JPL-Caltech/Space Science Institute)

The result: a hi-def imaging of water ice on Titan that formed a noticeable pattern. “Our PCA study indicates that water ice is unevenly, but not randomly, exposed across Titan’s tropical surface. Most of the exposed ice-rich material follows a long, nearly linear, corridor that stretches 6,300 kilometers,” or nearly 4,000 miles, the team wrote in their study, published in April in Nature Astronomy. That’s about 40 percent of Titan’s entire circumference. (For reference, the continental U.S. stretches less than 3,000 miles from coast to coast.)

The find is, in a word, weird. The team says it’s possible that the icy corridor formed sometime in the past billion years when Titan was still geologically active. And they specifically wonder if a sudden eruption of this ice onto the surface was tied to a “major cryovolcanic event” — a kind of icy volcanism — that astronomers had already speculated was happening during that time. While the answers remain unknown, future PCA work may help astronomers learn even more about the mysterious moon.